Everything About Fiction You Never Wanted to Know.
(Redirected from Fetch Quest Saga of the Twelve Artifacts)
Jump to navigation Jump to search 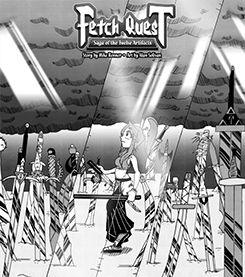 Our heroine, Saffron Lachesis, among a Field of Blades.

"It is special because it is a gift. Cherish it. Take care of it. And some day, years from now... use it to protect what's most important to you."
—King Roland Lachesis, to his daughter Saffron about her cane sword.

Saffron Lachesis is one of the two princesses of the Kingdom of Strife, although she doesn't quite look at all like a typical princess, preferring instead to utterly wreck the living daylights out of any criminal who is unfortunate enough to come across her, regardless of his original intent. She doesn't quite get along with her more conservative twin Nephilim. Ever since their father, the great king Roland Lachesis, left the kingdom for no apparent reason, they had to take care of it in his stead, sibling bickering and all. Nephilim's only solace from her trials and tribulations is the young Fafnirian and younger Happily Adopted sister Ambrosia Verdandi, whose desire to become a doctor someday she cautiously supports.

Meanwhile, from the Kingdom of Cicle, to the far north of Strife, a Child Prodigy in the arts of magic, Felicia Whitewind, is traveling to its capital, Strife City. As she travels, she is suddenly attacked by a couple of thieves. Although she defends herself quite well, it takes a stranger known only as Lionel "the Lucky" to dispatch them. After they meet, she accepts his offer to escort her to the city.

And that's just the tip of the iceberg.

Fetch Quest: Saga of the Twelve Artifacts is a webcomic series written by Mike Renner of In Wily's Defense fame and drawn by Alan Solivan, the Original Manga Artist. Although it reuses characters from both IWD and Tales of Southtown, it does have its own storyline and world, complete with people of all races and a compelling plot.

Updates by the chapter as of September 5, 2010. Not to be confused with a Fetch Quest in any respectable RPG.

Tropes used in Fetch Quest include:

Saffron: "You think of something smart to do. I'm gonna do something big and stupid!"

Ambrosia: One time when she was a kid, she got lost in the castle for several hours trying to find her room.