Everything About Fiction You Never Wanted to Know.
(Redirected from Different As Night and Day)
Jump to navigation Jump to search 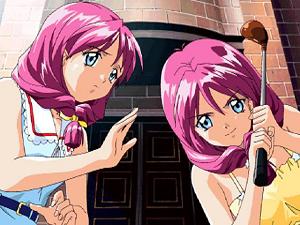 The Shirayuki sisters: a sweet Ingenue on the left, a mischievous blunt girl on the right. They also disagree on the way of keeping their Twin Switch game secret.

A Sub-Trope of the Odd Couple wherein the odd couple are twins, usually identical brothers or sisters. A prominent exception is actually in the former Trope Namer, The Patty Duke Show. It featured identical cousins, who were described as "One pair of matching bookends, different as night and day" in the Expository Theme Tune.

Basically, Yin Yang Twins as the main characters, with this being part of the series premise. They'll usually embrace using Identical Twin ID Tags to help the differentiation.

Sometimes overlaps with Cain and Abel, in which case you might expect Fearful Symmetry.

Extreme opposite is Single-Minded Twins or Creepy Twins.

Examples of Polar Opposite Twins include:

Retrieved from "https://allthetropes.org/w/index.php?title=Polar_Opposite_Twins&oldid=1746632"
Categories:
Cookies help us deliver our services. By using our services, you agree to our use of cookies.