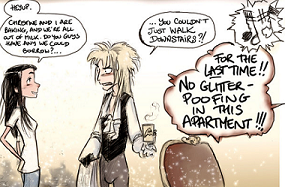 Corollary to Roommates, this Deviant ART fancomic crosses the Labyrinth, Phantom of the Opera, Pirates of the Caribbean and Les Misérables. This one is told from the girls' perspective, and apparently developed its own storyline with only loose connections to Roommates. Found here. Tends to run off of Failure Is the Only Option and Rule of Funny (or Rule of Fanservice)

Tropes used in Girls Next Door include:

Retrieved from "https://allthetropes.org/w/index.php?title=Girls_Next_Door&oldid=1655418"
Categories:
Cookies help us deliver our services. By using our services, you agree to our use of cookies.