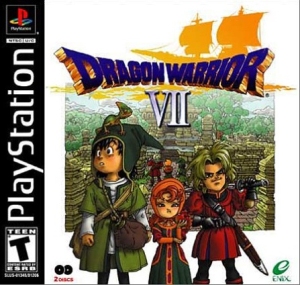 The first Dragon Quest game on the PlayStation, Dragon Quest VII: Warriors of Eden tells the story of a simple fisherman's son. His two best friends are Prince Kiefer, a Rebel Prince who regularly flouts his father's restrictions, and Maribel, the spoiled Tsundere daughter of the richest merchant in town. Theirs is an idyllic lifestyle, with no monsters haunting the countryside, no threats to their kingdom...

...And no other countries or continents beyond their small stretch of land.

See, during the final showdown between Good and Evil, most of the world got sealed away by the Demon Lord... and God never got around to fixing things. Whoops. Of course, that's where our hero comes into play, as he and his friends stumble across a great secret hidden in their island's Ancient Ruins and have to Set Right What Once Went Wrong via Time Travel. Or something like that, anyway.

Dragon Quest VII introduced the concept of 'Party Chat' to the series. By selecting 'Talk' whenever you weren't facing an NPC, your party members would comment on whatever just happened. This wasn't restricted to major plot events, either; Kiefer, Maribel and the others almost always had something to say about even the most minor NPC's 'Welcome to Corneria'. This feature made it into Dragon Quest VIII and several of the remakes of earlier games.

Tropes used in Dragon Quest VII include:
Retrieved from "https://allthetropes.org/w/index.php?title=Dragon_Quest_VII&oldid=1684052"
Categories:
Cookies help us deliver our services. By using our services, you agree to our use of cookies.