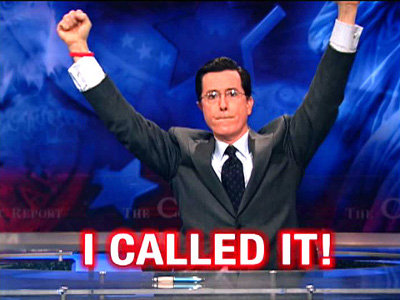 It's well known that wild fan theories are prone to being Jossed.

Sometimes, however, the opposite happens: after much speculation, a fan theory is finally confirmed in canon, proving that the trees were, in fact, epileptic all along. Cue the perpetrators of the theory exclaiming: "I Knew It!! Told you so!"

May overlap with The Untwist if the revelation is well-foreshadowed but most fans reject the theory exactly because it seems so obvious. And of course, may overlap with Epileptic Trees.

When, in universe, the characters say I told you so, see I Warned You.

Compare with Ascended Fanon, where the author canonizes the crazy fan theory in response to the fans. Also compare Belated Happy Ending.

Examples of I Knew It! include:

Retrieved from "https://allthetropes.org/w/index.php?title=I_Knew_It!&oldid=1894398"
Categories:
Cookies help us deliver our services. By using our services, you agree to our use of cookies.