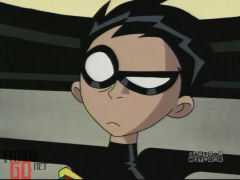 A character's mask is usually intended to obscure the face. In animation this used to also be a helpful cheat to draw something similar.

In order to look less wooden it is very common for the mask to become a character's face. The eyeholes and even the shape of the mask will contort seamlessly depending on the character's mood. At the very least the mask will move as if painted on. This is especially true when a character's eyes are not drawn while in costume.

This can even extend to eyeglasses (especially Eye Glasses) and similar accessories. The lenses of an expressive character become organic extensions of the body: widening with surprise, narrowing with suspicion, and scaring with shiny. Interestingly cracked glasses can autorepair thanks to this property between scenes. This is similar to Open the Iris, where the iris, not the pupil, widens and shrinks.

Even if the mask, helmet, or head itself isn't very expressive, you can still get a lot of mileage out of Disembodied Eyebrows. For other emotion-conveying clothing see Expressive Shirt.

A peculiar variant of this extends to characters who only have a skull for a head, and therefore have Expressive Eyesockets.

Examples of Expressive Mask include:

Another good example is Cassandra/Batgirl II's mask: Unlike Batman's it's full face and even the eyes are black, but they get a lot of mileage out of changing the shading on it.

Spidey's expressiveness extends to The Spectacular Spider-Man Animated Series, rivaled only by the marvelously emotive full head masks of the Green Goblin and the Chameleon. Chameleon at least has a good excuse, but we've also seen Flash with a donkey head mask during a play, the mouth of which moved just as fluidly.
They experimented with this for the movie, but decided that in live-action it moved the mask firmly into the Uncanny Valley. This changed when Spider-Man returned to the Marvel Cinematic Universe; see below.

Justifications exist: Iron Man is shown creating a faceplate for his armour that follows his own expressions, the better to intimidate his foes. In The Ultimate Super-Villains anthology Doctor Doom's updated mask contains micro-servos that can mimic expression. He habitually keeps it locked in an arrogant scowl to better intimidate his underlings.

Retrieved from "https://allthetropes.org/w/index.php?title=Expressive_Mask&oldid=1800186"
Categories:
Cookies help us deliver our services. By using our services, you agree to our use of cookies.