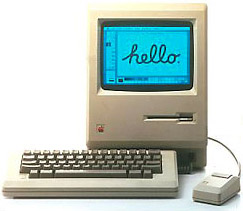 Traditionally, the Apple "Mac" Macintosh computer has been known for desktop publishing, Photoshop, audio and video editing, networking, and high prices, not gaming. (In fact, Apple management for some time actively discouraged any attempts to turn the Mac into a gaming machine, because they envisioned it as a business tool and feared that gaming would add to the already somewhat whimsical image of the computer.) But despite this it has a gaming history, including a small number of original titles, most famously Myst and Marathon. Another ironic moment is that, due to being based on the popular Motorola 68000 CPU, widely used at the time in various video game platforms, the Mac had a long history as an authoring platform for console games in the eight-bit and 16-bit era.

The Mac was a revolutionary computer, with its Xerox Alto-inspired graphical user interface, (though Mac OS X made it so modern Macs have a terminal feature to provide text-based functions other UNIX-based operating systems have) and Apple marketing executives were worried that it would be seen as a toy. So the only games developed for it prior to its release in January 1984 were a 600-byte Puzzle Game and a real-time board game by an Apple programmer that went intentionally underpromoted. After the launch, games were ported over from other systems, but there were only a few unique titles.

Several companies stepped forward to fill the gap. Silicon Beach's Enchanted Scepters and Dark Castle demonstrated the Mac's mouse-based input and multimedia capabilities, respectively. ICOM Simulations created the first fully mouse-driven Adventure Game in Deja Vu, followed by Shadowgate and two other "MacVentures". In the 1990s, Bungie gave Mac users a reason to be proud with Marathon and Myth. Halo would've been their next Mac title, but Microsoft bought them out and turned it into a launch title for the Xbox. Other major developers included Ambrosia (Escape Velocity) and Casady & Greene (Crystal Quest, Glider). Still another Mac debut, Cyan's HyperCard-based Myst, went on to reign as the all-time best-selling PC game for nearly a decade.

The Mac hardware went from the 68k CPU family to the PowerPC, and Mac OS went from Classic to X, but it remained a system of third-party ports from those who were willing. And as the "wintel" platform caught up with the Mac's technical sophistication, porting became more difficult and fewer were willing.

Things took a startling change in the mid-2000s. In 2006, the Mac went to the same 80x86 CPU as the IBM Personal Computer, even allowing it to run Windows without the need for an x86 emulator, and thus the vast majority of computer games (i.e. other than what was already available for Mac OS). This made porting easier, but still not a piece of cake; the Mac OS still uses different Application Programming Interfaces, such as OpenGL, in place of DirectX. It also used a different, more sophisticated BIOS called EFI in place of the outdated IBM PC BIOS that PCs were stuck with until Microsoft updated Windows Vista and 7. An upside of the transition was the sudden prominence of the Hackintosh, a standard PC running Mac OS X (versions 10.4 and up); though technically not allowed under Apple's EULA, Hackintoshing opens up a lot of flexibility that Apple doesn't offer on the low end, and there's even a book out there on how to do it.

Much like earlier 80x86 competitors to Windows such as Linux, native game ports have mostly died away as a result, replaced with the common CPU architecture's ability to use various types of emulation to run Windows games at a decent speed or simply reboot into Windows using the Boot Camp bootloader software. In particular, a commercial enhancement of Wine called Cider is bundled into most current Mac game "ports", so native Mac games have been reduced from those ported by third parties to those originally written by Multi Platform Mac developers, like Blizzard, id, and (in a recent surprise) Valve, bringing Steam to the Mac.

Named after the McIntosh apple, which you can find in the produce section of a grocery store near you. No relation to a Mac(kintosh) coat, Mac(aroni) and Cheese, a McDonald's Big Mac (though you won't believe how often this crops up in jokes in both fandom and hater circles alike), Big Macintosh, a blue dog named Mac, someone who has a blue imaginary friend or somebody on the street yelling "Hey, mac!" to you.

Macs are generally classified into three eras: Old-World, New-World and Intel. Old-World Macs use the Toolbox BIOS, a proprietary BIOS only capable of loading Mac OS, and they had most of their graphical instructions stored in-BIOS. Later "Old-World" Macs are actually hybrids, they have both Open Firmware (albeit an early implementation) and Toolbox BIOS stored on ROM. The thing that sets these hybrids apart from New-World Macs is that while hybrids store both BIOS's on ROM, New-World Macs only store Open Firmware on ROM, but they are capable of loading the Toolbox off the hard disk into RAM and chainloading Toolbox from there.
Black & White Macs, 1984-90
The Macs of Dark Castle and the ICOM MacVentures.
Processors

Starting with the iMac, Macs have fully embraced the industry-standard Open Firmware BIOS instead of its homegrown Toolbox BIOS (while Open Firmware existed as early as the Power Mac era, the implementation on those is somewhat kludgey and they co-existed with the Toolbox BIOS on ROM). However, on early New-World Macs, it is possible to have Open Firmware load the Toolbox BIOS from the hard disk into RAM and chainload it, a technology known as ROM-in-RAM, and is actually necessary for running Mac OS 9 as a stopgap solution while Mac OS X was still being developed. This feature was removed from later G4 Macs and is absent from G5 Macs.
Translucent iMac
The iconic Mac of the Unreal / Quake era. Starting with its direct ancestor, the Power Mac G3 family, Apple dumped the homegrown chipsets of the Beige PCI era and went with a solution based around a Motorola "north bridge" and ATI GPUs; this saved money and actually increased performance.
Processors

Memory Display Sound Mac OS "New World" Power Macs, 1999-2005 The Mac takes a big leap forward with OS X, and dumps all the remaining legacy Mac standards (and whatever legacy PC standard it also had), but remains in its own world with the PowerPC processor. G3 and early G4 models came in shells with aesthetics similar to iMacs in that they have a rounded, semitransparent shell, later G4s dropped the transparency altogether, and the G5 ditched the plastic casing for an aluminum body, which was brought forward to the Mac Pro era. Processors Memory Display Sound Mac OS

Starting mid-2005, Apple ditched Motorola's Power architecture for Intel's x86/x86-64 after Motorola failed to deliver a G5 Power CPU that runs cool enough to be placed on a laptop. With this move, Apple also ditched Open Firmware in favor of Intel's revolutionary EFI BIOS (which is only recently started to be embraced by the PC world). The first few generations of these Macs are only 32-bit capable, while newer generations are fully x86-64 compatible (the latter being the necessary requirement to run Mac OS X Lion, thus the 32-bit machines are only capable of upgrading to Snow Leopard).
Present-Day Mac Mini
The modern bottom-end Mac.
Processors

(Intel-only titles marked with an asterisk)