Everything About Fiction You Never Wanted to Know.
(Redirected from Pokémon Diamond and Pearl Adventure)
Jump to navigation Jump to search 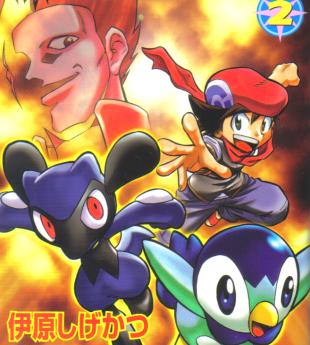 The manga stars Hareta, a boy who has lived in the wild for most of his life because Professor Rowan noticed that he had the ability to instantly become friends with Pokémon.

One day Hareta is called to Professor Rowan's lab by his assistant, Mitsumi. The two of them then set off in search for the legendary Pokémon Dialga. They however have to worry about Team Galactic, who are also after Dialga. And off they set on a journey, beating the Gym Leaders (it's a Pokémon manga, what do you expect?) while simultaneously trying to stop Team Galactic from capturing Dialga.

Not to be confused with the Pokémon Diamond and Pearl-based chapter of Pokemon Adventures (Which has "Platinum" added to it in Viz Media releases to distinguish each other).

Tropes used in Pokémon: Diamond and Pearl Adventure! include:
Retrieved from "https://allthetropes.org/w/index.php?title=Pokémon:_Diamond_and_Pearl_Adventure!&oldid=1675292"
Categories:
Cookies help us deliver our services. By using our services, you agree to our use of cookies.