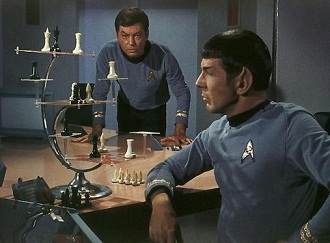 A genius in three dimensions, in the process of winning his fourth straight game...against a computer.

A common visual shorthand to indicate that a character is smart is to have them play Chess, Go, or some similar game. After all, Sesquipedalian Loquacious dialog can disrupt pacing, and not everyone is a chalkboard-toting professor, but it's unobtrusively easy to insert a chessboard into a scene. The character doesn't even have to actually play it; simply lingering nearby with a concentrated gaze is enough to suggest deep thinking.

While this is a popular trope with The Chessmaster and the Magnificent Bastard, it's not limited to them, and having a dumb character (try to) play chess is good for laughs. A variation is having a pair of idiots play draughts with a chess set.

Other strategy games can be substituted depending on the setting. To make it easier for the audience to identify with this trope, these games will be shown as very similar to chess, either by visual cues (checkerboard designs, chess-like pieces) or described outright as "<X>-chess" (Wizard chess, Vulcan chess, etc.).

If the normally very bookish character really loses his temper, he might end up Flipping the Table instead.

Retrieved from "https://allthetropes.org/w/index.php?title=Smart_People_Play_Chess&oldid=1966252"
Categories:
Cookies help us deliver our services. By using our services, you agree to our use of cookies.