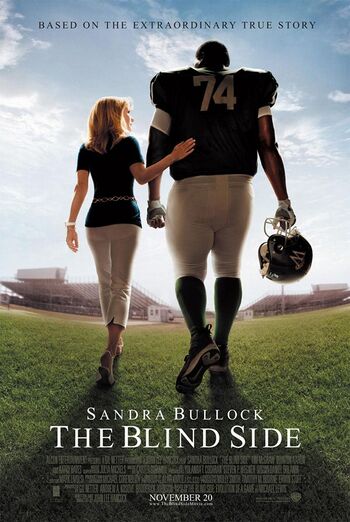 Michael Oher was born in the housing projects of Hurt Village to a crack mom and a father who left a week after he was born. By the time he's of high school age, he's homeless. He is on the verge of failing out of high school, and dismissed by teachers and shunned by other students as a Big Scary Black Man, despite actually being a Gentle Giant.

With the help of the Tuohys, Michael becomes a star football player, leading the Miracle Rally against the cheating and unnecessarily rough Opposing Sports Team. Colleges come knocking on the door with athletic scholarship offers.

However, an NCAA investigation raises doubts in Michael that the Tuohys have his best interest at heart. Only after Michael confronts his Dark and Troubled Past can he finally learn to truly trust his new family. The film ends with footage of the real Michael being drafted into the NFL.

Notable for netting Sandra Bullock her first Academy Award for Best Actress, in the very same year that she won a Worst Actress Golden Raspberry Award for All About Steve.

Tropes used in The Blind Side include:

Tropes found in the book include:

Retrieved from "https://allthetropes.org/w/index.php?title=The_Blind_Side&oldid=1911259"
Categories:
Cookies help us deliver our services. By using our services, you agree to our use of cookies.