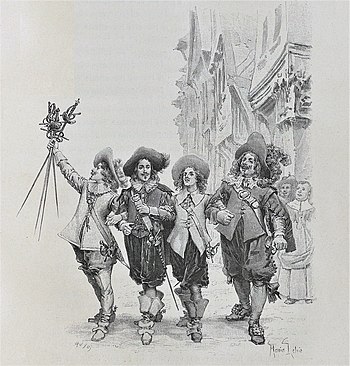 The three Musketeers, give or take a Gascon.

Les trois mousquetaires. One of the most famous pieces of French Literature, written by Alexandre Dumas (the father), the author of The Count of Monte Cristo.

In the year 1625, d'Artagnan, the son of a noble but poor family, left his home in Gascony and headed to Paris to follow a dream; become a Musketeer of the Guard, one of the most prestigious military units in the whole of France. Armed with only his courage and a letter of introduction from his father, d'Artagnan heads out.

Though he loses the letter in an altercation with a mysterious man in a black cape with a scar on his face, d'Artagnan presses on and meets the titular three musketeers: leader and father-figure / Lancer Athos, the vain and famously gluttonous/ Big Guy Porthos, and The Casanova / Smart Guy Aramis.

Together, they have a series of swashbuckling adventures in France.

The main antagonists are Cardinal Richelieu and his agent, Milady de Winter. D'Artagnan's Love Interest is Damsel in Distress Madame Bonacieux, at least while he is not being seduced by Milady.

The book has been adapted for TV and film many times. It has two sequels, which are much less well known. However, some parts of one particular subplot in the second sequel, related to the imprisoned twin brother of Louis XIV, have "inspired" several films with the title The Man in the Iron Mask.

Adaptations and spin-offs with their own pages include:

Oh yeah, and they got a candy bar named after them.