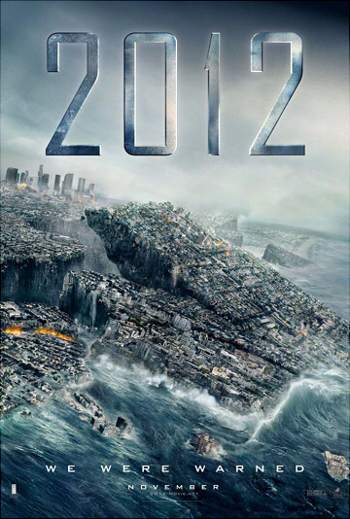 But we saw it all the same.

The first trailer for the movie showcased a Tibetan monk bashing a giant bell with a log on top of a mountain in the Himalayas (this is the same mountain range as Everest, keep in mind) while various shots of water rushing and rumbling can be heard. Then, all of a sudden, boom, a massive torrent of water goes over the mountains and engulfs everything.

This movie is by the same guy who did Independence Day and The Day After Tomorrow. There's probably a pattern here.

Word of God states that this is Emmerich's final disaster flick, so he tried as best as he could to pack enough Stuff Blowing Up and Monumental Damage into it to last a lifetime.

A Spin-Off TV series, tentatively called 2013 and focusing on a group of survivors, was planned. However, ABC decided to not finance it and it never saw the light of day.

Not to be confused with Twenty Twelve, a BBC sitcom about the committee preparing for the 2012 Olympic Games, or Rush's album 2112.