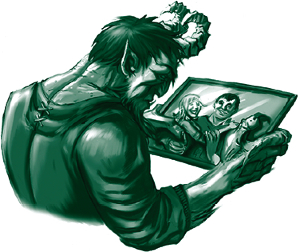 You can't go home again if "you" never left.

What defines "you"? The concept of identity, never mind the search for it, is a complicated question that fiction tries to answer. Beware though, fiction likes to throw us curve balls.

Is it your memories? Those can be removed or altered. (Oh, are there ever so many ways.) How about your personality? Well, that changes over time naturally like it or not, but then again you can play someone else and find you like being them better. Is it your body? Less luck there, if it isn't a body swap it's a gender swap or something much worse. Does the Soul have anything to do with this? Are you still "you" if you reincarnate?

Then again, most of the previous changes are negative, but what about positive alterations? Flowers for Algernon Syndrome and What Measure Is a Non Super make you wonder just how valuable you are when you gain... or lose... faculties. The Mind Is a Plaything of the Body, after all.

Don't let our meandering college philosophy depress you. After all, every non-nerve cell in your body is replaced in seven years (some die and get replaced, some go through mitosis and divide into two... wait, would that make those the same cell or two new ones? Does the original count as dead after that? Argh!), and change—the evolution of a personality—is natural. So you might as well wonder if you are the same "you" from five minutes, days, years, or decades ago.

Not to be confused with an Assimilation Plot, in which your identity is subsumed into a Hive Mind. Compare Split Personality Merge, where two personalities become one, and Mental Fusion, where separate minds briefly become one. See also Amnesiac Lover, who doesn't know how to love back after becoming an amnesiac. Grand Theft Me can happen if said identity was stolen. Living in a society where you can't have a real identity is Individuality Is Illegal. See also Quest for Identity. Compare Lost in Character, where an actor becomes lost in a role.

Examples of Loss of Identity include:

Retrieved from "https://allthetropes.org/w/index.php?title=Loss_of_Identity&oldid=1848811"
Categories:
Cookies help us deliver our services. By using our services, you agree to our use of cookies.