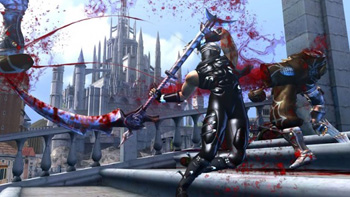 You reap what you sow.

The scythe is just one of the weapons an Improbable Weapon User is likely to use. Likely to mark the special or dangerous enemy, as well as the macabre touch brought on by evoking The Grim Reaper.

Scythes look good, but in reality are impractical weapons; Both the blade and the point face inward, making it impossible to hit an enemy from a distance. Further, traditional agricultural scythes have a somewhat curved shaft with handles mounted on the sides, further decreasing the range. See Wikipedia's article for pictures. However, scythes have been used as polearms before, though this usually involved reforging the blade. Most modern day depictions of scythes have double edges or angle the blade further upward so that the scythes can be swung in the same manner as an axe, with the added bonus of being able to cut an opponent in half after you've impaled them. Scythes with energy blades, though almost certainly only designed for aesthetics, are actually somewhat more viable, since an energy blade should be theoretically able to cut along any edge.

Generally speaking, actual farmers are rarely depicted using scythes (perhaps because the death connotations have overidden the long-obsolete agricultural ones), so pitchforks are their melee weapon of choice in most armed-serf situations. Indeed, scythes, because of the aforementioned impracticality have rarely been weaponized in the real world, unlike most other farming tools. (But see Real Life examples below.)

A sub-trope of Weapon of Choice.

Examples of Sinister Scythe include:

Retrieved from "https://allthetropes.org/w/index.php?title=Sinister_Scythe&oldid=1876472"
Categories:
Cookies help us deliver our services. By using our services, you agree to our use of cookies.