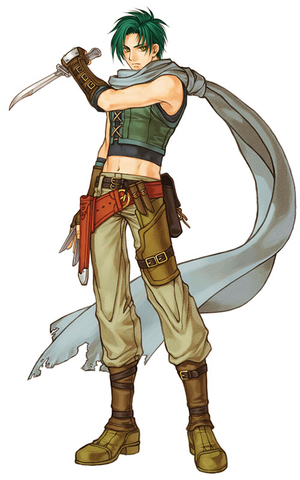 There are many ways to show someone is Badass. Oneliners, getting an Awesome Yet Practical power, and knocking everyone down one rank in terms of power. There is also... the scarf. It can be any color, although it's frequently red, yellow or black. And it seems to always be flowing in the wind.

Can occasionally be replaced with a sash or a headband. Is often, but not always, a Shout-Out to Kamen Rider, one of the earlier uses of the trope and quite iconic in Japan-land. Frequently part of an Adventurer Outfit.

May require serious MST3K Mantra when you realize that a long bolt of cloth wrapped around your neck is one of the first things you should take off before a fight. Or what happens to long things that flow in the wind during as much as taking a shortcut through the nearby park.

A Sister Trope to Badass Cape, Fedora of Asskicking.

Examples of Scarf of Asskicking include: