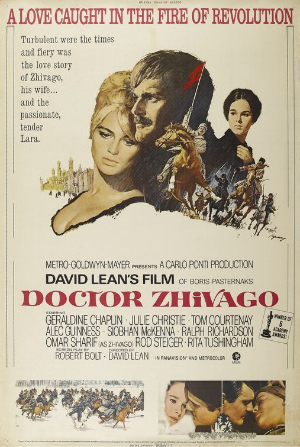 In a World Gone Mad, One Man chose to make a difference... By becoming a Doctor!

Legendary generation-spanning epic about The Russian Revolution starring Omar Sharif as a doctor meeting the challenges of a World Gone Mad. Directed by David Lean as a follow-up to Lawrence of Arabia with similarly dramatic vistas, this time of the Russian steppe.

Featuring Julie Christie as Lara, the object of Yuri's affections, and Rod Steiger as the manipulative Komarovsky. Other cast members include Alec Guinness, Geraldine Chaplin, Tom Courtenay, and Ralph Richardson.

For its epic scope, Sharif's performance, and David Lean's visual style, the film is generally praised as a classic. It is also notable for Maurice Jarre's music score, which includes the world famous "Lara's Theme".

It also the heralded the last of MGM's great epic movies, as they announced even during production. They simply didn't have the moolah to finance these vast vista works with thousands of extras﻿ and a cast full of stars: the next movie they made was one twentieth of this cost.

A Russian version of the movie was done in 2006 with a total running time of over 8 hours, thus hewing closer to the book.

Masterpiece Theatre in 2002 also made a Miniseries.[1] Perhaps could have been the basis for a High Concept Forensic Drama; (Burdened by equipment shortages, Dr. Zhivago solves tough cases... IN SOVIET RUSSIA!) but, fortunately, it wasn't.

Based on the epic novel by Russian poet and writer Boris Leonidovich Pasternak.