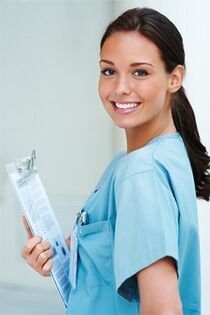 How many single young male doctors would say “no” to a nurse as pretty as this model?[1]

Exactly What It Says on the Tin, medical personnel who are attractive. Makes you just wanna shout: "Helloooo, nurse!"

Unfortunately for people who expect this trope to be Truth in Television, anyone who has ever been to a real hospital will notice that the nurses are more concerned with their jobs than their appearance. They will be wearing little if any makeup, and will always be in plain old scrubs, which are nowhere near as appealing as the nurse outfits in TV/magazine land (or the duds favored by their counterparts in the legal profession, for that matter) and you'll almost never see a nurse on the job with her hair done up like they always do on TV. The fanciest "style" you will likely ever see is a simple ponytail, for three good reasons: first, many patients are allergic to the chemicals in hair products; second, you don't want to have to rejigger a hairdo because you accidentally dangled the end into something gross, and third, it's extremely poor form to have to wipe hair out of your face while you're trying to save someone's life.

Even in the cases where this trope is Truth in Television, there's not a lot of sexy activity going on. Nurses see you when you look and feel your worst. They watch you vomit, clean your catheters and bedpans, jab you with sharp needles, and are prone to sticking uncomfortable things in various orifices. Finally, there is really nothing pleasant about genital or rectal examinations. Just because you might be naked does not mean anything fun is about to happen.

Examples of Hospital Hottie include:

Retrieved from "https://allthetropes.org/w/index.php?title=Hospital_Hottie&oldid=1961119"
Categories:
Cookies help us deliver our services. By using our services, you agree to our use of cookies.