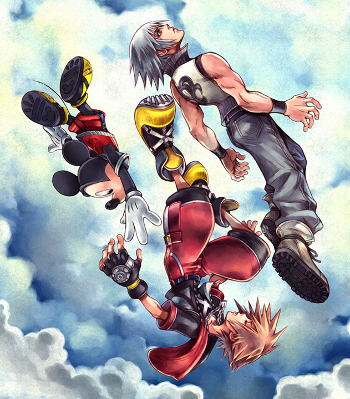 The seventh (not counting remakes) entry into Disney and Square Enix's crossover series Kingdom Hearts, Kingdom Hearts 3D: Dream Drop Distance is a game for the Nintendo 3DS hand-held. This is the game that serves to connect not just Birth by Sleep, 358/2 Days, and Re:coded, but also every single game before them to Kingdom Hearts III itself. The story initially concerns Sora and Riku's Mark of Mastery test set by Yen Sid--a journey into the realm of dreams and sleep, where they are to find the seven Sleeping Keyholes and release the worlds trapped within. However, during their quest, a mysterious and malevolent young man in a black coat makes himself known, and villains from the past begin to follow suit...

Featuring all new Disney worlds alongside old worlds such as Traverse Town, the game stars both Sora and Riku as the main characters, both as their younger selves (a side effect of them traveling to worlds trapped in the past) but with entirely new attire. The game has graphics on par with Kingdom Hearts II, thanks to the higher processing power of the 3DS, and supports full 3D imagery, partial AR functions and the 3DS Slide Pad expansion. The gameplay is based on that of Birth By Sleep, but with several new additions and alterations such as the Free Flow Action mechanic and the new recruitable Dream Eater enemies. Gameplay switches between Sora and Riku by way of the new "Drop" gauge, which continually decreases; when the gauge completely empties, the current player character falls asleep and is replaced by the other.

The first publicly released trailer from January 2011 can be seen here, whilst the TGS 2011 trailer can be seen here and with English subtitles here. You can watch the Jump Festa trailer here. A new trailer has also been released in February 2012, and is available here. The first English trailer has been released, and is here.The game was released in Japan on March 29th 2012, with a North American release on July 31st, 2012 and a European release on July 20th, 2012.

Has its own And the Fandom Rejoiced page here.