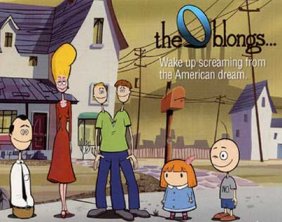 So the gist of The Oblongs is this: There's the eponymous family living in the extremely poor half of the town - in this case, the Valley portion of Hill Valley - where the air is toxic and the land befouled. There's Bob, the father, who has no arms or legs yet somehow hops his limbless torso around from place to place, handles things with his mouth, and drives a car; Marie Kay "Pickles" Oblong, the alcoholic, chain-smoking mother with a huge beehive wig who used to live in the Hills; Biff and Chip, the oldest and Siamese twin brothers; Milo, their heavily medicated little brother with a myriad of mental and social illnesses; and Beth, the youngest and only daughter, who is possibly the most "normal" of the family despite the large pinkish tumor growing out of her head.

The series covers the family's day to day lives, e.g. Bob working at Globocide, Milo, Biff and Chip getting mocked by the popular people, and Pickles stumbling in and out of intoxication and the occasional lusting over of her husband. The show pops up from time to time on Adult Swim, and is also available on DVD.

Apparently, series creator Angus Oblong hated the final version and claims show runner Jace Richdale and the rest of the writers froze him out of his own show. Despite this, he agreed to appear on the DVD release, albeit with his face obscured and his voice digitally altered for reasons known only to Oblong himself. On said DVD, Oblong claimed that while he actually thought the finished show was Ok, he had such little involvement that he would prefer people say that it was "based on his work" than "his show." Whether this is true or he was just being nice was anyone's guess.

Tropes used in The Oblongs include:
Retrieved from "https://allthetropes.org/w/index.php?title=The_Oblongs&oldid=1771514"
Categories:
Cookies help us deliver our services. By using our services, you agree to our use of cookies.