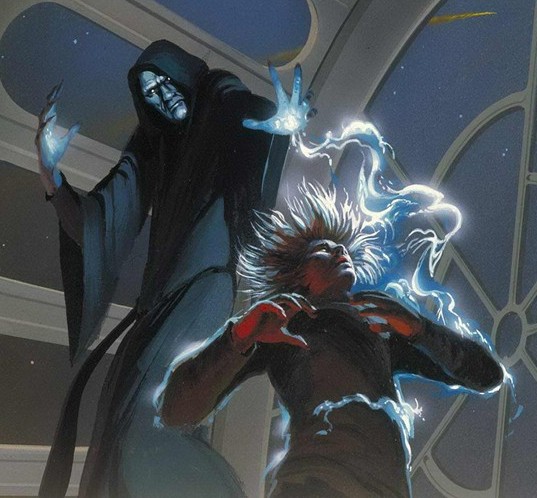 Who ordered the medium-rare Jedi?

There's a special place in the heart of Sci Fi and Fantasy geeks for the Agony Beam, usually because it's carved that chunk out of our collective heart and crawled into the resultant cavity. Despite being an old school staple that's used to the brink of cliche and back, it still sees widespread use and continues to serve a useful purpose: causing PG-rated pain on victims, much like an evil version of Stun Guns.

Along with its big brother the Death Ray, the Agony Beam is a staple in the armoury/spellbook of every Evil Overlord and Evil Sorcerer worth their salt. It is the Swiss Army Knife of a villain's arsenal: at low levels it enforces obedience when defiant prisoners are ordered to Kneel Before Zod, it serves as punishment for incompetent minions in place of more lethal measures, and prolonged use or higher settings work as a (bloodless) torture method, and when in excessive use or high power settings it can drive one mad or outright kill the victim. Usually it's depicted as a beam that emanates either from a gemmed ring, a staff, a ray gun, or even a miniature lightning storm. This last one works wonderfully as part of the lightshow when the villain gets Drunk on the Dark Side. When the victim is a major character, the Agony Beam is usually accompanied by Evil Gloating.

As mentioned earlier, the Agony Beam is rated PG. This is because, like the Death Ray, it's very "clean", leaves no scars, and is much less squicky than comparable torture tropes while being just as effective. Like Electric Torture, the lack of physical injury means the hero will be able to continue in the plot once it's over. That said, authors can turn it Up to Eleven and cause such unbearable levels of agony that it can break the victim's mind. All things considered, even at low settings the Agony Beam is the moral equivalent of a Dog Kicking Ray, a fact usually reinforced by the wielder getting off on using it.

When turned on a hero, they will demonstrate their mettle by not bending knee until it's at least two settings higher than necessary. Of course, at one point you can expect the villain to have their weapon turned against them (usually thanks to mirrors and/or silver trays) and do much less well.

Closely related to Electric Torture. The "Increase the intensity!" sample conversation there applies for this too. May be part of a Robotic Torture Device's arsenal. If used in a device attached to keep someone compliant, it becomes a Shock Collar. Can be a cause of I'm Having Soul Pains.

Examples of Agony Beam include:

Retrieved from "https://allthetropes.org/w/index.php?title=Agony_Beam&oldid=1868217"
Categories:
Cookies help us deliver our services. By using our services, you agree to our use of cookies.