Everything About Fiction You Never Wanted to Know.
< Super Robot Wars W
Jump to navigation Jump to search

A family of Trailers (a catch-all term for guys who pretty much do everything in space other that salvage (The Junk Guild's job) and battle) who operates the spaceship Valstork. They're friends with Lowe Gear's crew.

Blessfield "Hawkeye" Ardygun was a former Space Pirate, and had many run-ins with law enforcement agents such as Heinrich Freeman and Kotaro Taiga. At one point, he and Taiga even clashed over the same woman. Bless won.

Bless gave up the life of a Pirate, and they instead became Trailers. They had three daughters (Shihomi, Akane, and Mihiro), and a son (Kazuma, natch).

Unfortunately for Bless, he ended up 'dying' against the Database, sending Kazuma into a Heroic BSOD. However, turns out Bless was from Mars, thus executed a Boson Jump where he is flunged to a VERY VERY distant past (Shortly before the Big Crunch that proceeded this universe's Big Bang) where he created his family legacy machines as well as the Database. He obviously didn't live to see his creations go awry. 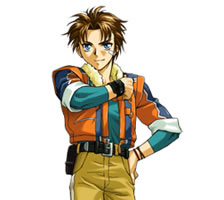 The main character of Super Robot Wars W (Stands for "Double U", as per the sthick of naming game's subtitles with something near the word "DS"). Kazuma's a Trailer, a type of jack-of-all-trades people in space hire to do various things, and travels around with his family in their big fancy ship Valstork and piloting their Valhawk with cute little sister, Mihiro. Kazuma's extremely hot blooded and determined to help get rid of the common stereotype that Trailers = space pirates by kicking the asses of said space pirates and generally doing good and making a name for himself. They eventually hook up with the GGG and Space Knights in a project to help protect the Earth from a ridiculous number of threats because Kazuma's dad was an old rival of their leaders, and hey, the Valstork's Big Gun is a good thing to have on your side.

Eventually, he and his family are attacked by a girl named Aria Advance and a bunch of stuff happens. His dad goes missing after a Boson jumping accident caused by Detonator Orgun firing his most powerful weapon at Inference, the leader of the Database, after being goaded sufficiently by him, which results in him going into a period of Herioc BSOD and causes him to run away.

After a time skip, a new and much more handsome Kazuma rejoins his family and kicks ass again in their shiny new Combining Mecha. This time with Defectors From Decandence Regulate and Aria, who had outlived their usefulness and were tossed away after failing their masters one too many times, joining them.

As far as mecha goes, he starts out with the Valhawk, and it later combines into the Valguard, and then combines again with Aria's Arm Arcus and Applicant's Arm Stoma into the Valzacard, probably one of the most broken originals in SRW history, on par with the SRX Altered Banpreios. These tropes apply to Kazuma:

The youngest member of Valstork family, usually work as Valhawk support pilot. She's very attached to Kazuma since he's one who take care of her after their mother's death and everyone else are too busy (although never gone too far, offcially).

The Scribes of Knowledge, more commonly referred to as the Database, are the main enemy of Super Robot Wars W. They were originally created to seek out and preserve all knowledge in the universe by the civilizations of the previous universe who were at that point just waiting for the Big Crunch. They were inspired to do so by Blessfield Ardygun teaching them the importance of memories, after he was thrown back in time during a battle with the very same group which he helped create. Led by Inference, with Critic, Applicant and Regulate as his advisers, and Aria Advance as their field commander. Their modus operandi is to go from civilization to civilization, assimilate all the knowledge each possesses, and then eliminate them to make that knowledge rarer and therefore more valuable. Tropes associated with the Database:

Retrieved from "https://allthetropes.org/w/index.php?title=Super_Robot_Wars_W/Characters&oldid=1899002"
Categories:
Hidden category:
Cookies help us deliver our services. By using our services, you agree to our use of cookies.