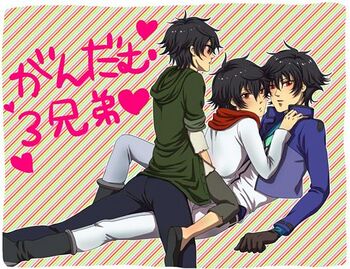 It's a simple tale: Person photocopies self, or travels to an Alternate Universe, or another time. Person meets self. Both selves "make beautiful music" together. After all, what better person to be most intimate with?

In erotica, this is often considered more acceptable than most other types of fetishes (like say, incest), seeing as it's, well, impossible in reality. For now, anyway.

In Real Life, a person who would like to do this is a true Narcissist or, in truly extreme cases, an autosexual. No real life examples, please; we don't care, because it doesn't matter from a storytelling point of view.

Compare and contrast Opposite Gender Clone, Twincest, My Own Grampa.

Note that this is not the same as A Date with Rosie Palms.

Examples of Screw Yourself include:

A bit of Adam Westing in there for William Shatner, playing off his perceived enormous ego.

It doesn't last however, as the two versions leave him for each other.

Retrieved from "https://allthetropes.org/w/index.php?title=Screw_Yourself&oldid=1967694"
Categories:
Cookies help us deliver our services. By using our services, you agree to our use of cookies.