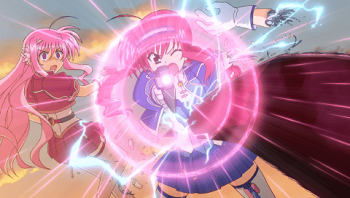 In real-life, most physical fights get less dramatic as time goes on. What started out as two guys in their physical prime going at each other, if it goes on for ten minutes, becomes two guys bearing the accumulated injuries of ten minutes of fighting going at each other. Big hits become fewer and farther between, there's a lot more slow grappling, and it just starts to look sloppy. Similarly if one opponent at any point becomes significantly more injured than the other, that disadvantage persists throughout the remainder of the fight.

Unfortunately, this does not make for good storytelling, so when the heroes in most media start losing, that's generally because they're about to come back from behind and win the fight in the end. After all, it wouldn't be very interesting if they just stomped the baddies without even trying, and it wouldn't be very satisfying if they lost.

The problem with video games, though, is that the progress of the hero is directly tied to the skill of the player. And a player who's bad enough to start losing is probably bad enough to continue losing. While video games rarely simulate the negative effect that injuries have on fighting prowess, this still makes video game fights more similar to reality than the heroic mano-a-mano battles seen in movies.

The solution is to make characters more powerful when they're near death, to make the dramatic comeback a possibility. Hence the Desperation Attack, abilities or equipment that power up as the player character starts losing. Which, for most games, usually means when their health gets really low.

Occasionally, this leads to a situation where the best strategy is to run around on the edge of death for the massive bonuses it gives you.

Related to the Limit Break, which is frequently accessed by taking damage but does not strictly require the user to have critical HP before use. Can also be a Sub-Trope of a Critical Status Buff (or its enemy counterpart, Turns Red; which in turn has a move-related subtrope, called Last Ditch Move). Can also overlap with Last Stand.

Examples of Desperation Attack include:

Retrieved from "https://allthetropes.org/w/index.php?title=Desperation_Attack&oldid=1927237"
Categories:
Cookies help us deliver our services. By using our services, you agree to our use of cookies.