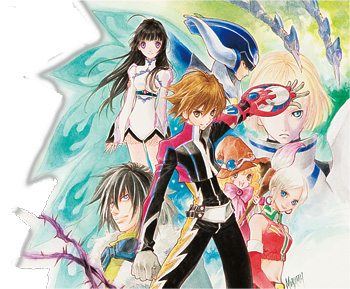 Tales of Hearts is a 2008 video game, the third entry in the Tales (series) to be released for the Nintendo DS, and the first to be worked on by Namco Tales Studio - and it's a masterpiece. Gorgeous graphics produced by Production IG, a score by series veteran and genius composer Motoi Sakuraba, and a combo-centric battle system in the vein of the remake of Tales of Destiny. The game is truly a harkening to the best classics of the series: in gameplay fast-paced and with ridiculous levels of customization, in plot no less than we expect from Namco, and beautiful all the way through.

In the distant past, parasitic monsters known as Zerom ravaged the world, feeding on the hearts and emotions ("Spiria") of all living things. To defend the world, weapons called "Soma" were developed, allowing weapon-masters to physically enter the Spiria of an infected victim and eliminate the Zerom directly.

Centuries later, in the quiet country village of Shibul, enthusiastic teen Shing Meteoryte trains to become a Soma Master under the tutelage of his grandfather Zex. Meanwhile, two siblings- Kohak Hearts and her elder brother Hisui- are on the run from a mysterious sorceress called Incarose.

Not long after the Hearts wash up on the shore of Shibul and meet Shing, Incarose catches up to them, killing Zex and cursing Kohak into a deep sleep. With no other way to save Kohak, Shing takes up Zex's Soma and enters her Spiria. There he finds an infection of Zerom, encounters a beautiful emerald-haired girl straight from a famous nursery rhyme, and witnesses the Spirtune that forms the core of Kohak's Spiria shatter into pieces.

With Kohak reduced to an emotionless doll, Shing takes responsibility and embarks on a worldwide quest with Hisui to track down the missing pieces of Kohak's Spirtune and restore her to normal, one emotion at a time. Of course, it's never as simple as that: a new wave of Zerom infection is sweeping the world, several factions from the local Empire and Church are fighting against Shing and each other over the pieces of Kohak's Spirtune, and just when it looks like everything might turn out for the best, the story takes a hard right turn and reveals another Big Bad whose plans extend to the origins of the Zerom themselves.

Shing, Kohak and Hisui are joined by a few others on their quest: Beryl Benito, the team's Token Loli who dreams of becoming the Imperial Painter; Innes Lorenz, an enigmatic Soma saleswoman with inhuman strength; and Kunzite, a humanoid robot with an artificial Spiria. Then there's Chalcedny Arcome, an elite agent of the Valeia Church tasked with preventing the restoration of Kohak's Spirtune.

Highly recommended if you can make it through the moonspeak. Otherwise, Tales Of translator Kajitani Eizan is working on a full translation. Kohak is also the very first Hearts character to appear in an official localization through the Cameo Battle in Tales of Graces f (renamed as 'Amber').

Tropes used in Tales of Hearts include:
Retrieved from "https://allthetropes.org/w/index.php?title=Tales_of_Hearts&oldid=1899415"
Categories:
Cookies help us deliver our services. By using our services, you agree to our use of cookies.