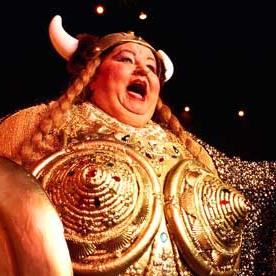 Dude... it's definitely over.

Brawn Hilda is, essentially, a strong, mannish, usually foreign woman. However, she's not a Hot Amazon, her strength is seen as unattractive, as she usually (purposely or not) emasculates the hero by beating him up or outdoing him in "manly" activities ( such as arm wrestling, boxing, hot dog eating, pretty much anything unfeminine really...) She usually has a stereotypical German or Russian accent, a masculine face, and is often a stereotypical female immigrant (maid, mail-order bride, etc....) or some sort of hardcore Olympic-esque athlete. Basically, the Brawn Hilda is the Fat Girl on steroids. Her personality can vary from motherly but overprotective to gruff and cantankerous—but the great majority of the time she's just a gag character whose humor stems from being the opposite of a hot exotic chick, often shown as a disappointment when a female masseuse or cleaner is hoped by a male character to be young and attractive (the masseuse will cause considerable discomfort when she works).

In more serious contexts, she tends to turn into The Rosa Klebb version of The Baroness. Bonus points if she's blonde, wears braided twin tails, and possesses the name Helga, Hilda, or Olga (which is the Russian version of Helga!).

A common characterisation of cave women.

The trope name is a reference to the Icelandic queen Brunhild in the German epic Das Nibelungenlied, who could possibly be the inspiration for such characters. In the story she challenges men who attempt to wed her into warlike games, throws boulders with ease, and even ties her own husband up and hangs him on the wall. These traits, combined with the large women who usually play her in operatic adaptations, have led people to commonly assume she's an unattractive, mannish woman, even though the story actually describes her as very attractive. "It ain't over 'til the fat lady sings" is likely a reference to Brünnhilde's famous (and memetically glass shattering) immolation scene in Richard Wagner's Götterdämmerung. Big women (like Frieda Leider, Birgit Nilsson, and Jessye Norman) play her in the operas because they're usually the only ones with the vocal vigor to take on Brünnhilde's role.

Contrast with the Fat Girl, who is large, but probably not athletic; with the Hot Amazon, who may be athletic, but not usually large, is never unattractive and is more attractive because of her Action Girl traits; with Amazonian Beauty, when she is muscular and that may be part of what makes her attractive but she is portrayed to be attractive regardless; with The Baroness, who is the classic East European Femme Fatale; with the Big Beautiful Woman, whose bulk is considered attractive in of itself, and who is often non-European. Compare No Guy Wants an Amazon, when this keeps her from finding a man; and Butch Lesbian, if she likes the ladies instead.

Examples of Brawn Hilda include: