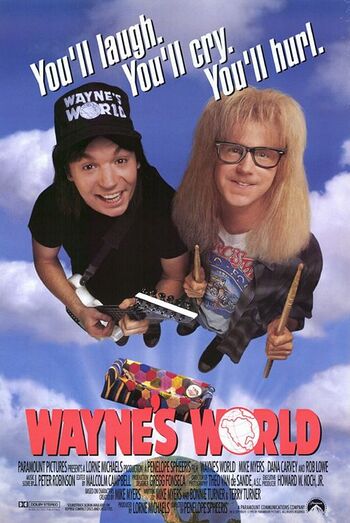 Wayne's World is a 1992 comedy film, starring Mike Myers as Wayne Campbell and Dana Carvey as Garth Algar, hosts of the Aurora, Illinois-based cable access television show Wayne's World. The film was adapted from a sketch of the same name on NBC's Saturday Night Live.

The movie follows the adventures of Wayne and Garth, the co-hosts of a cable access show, in their quest for fame and fortune, battling a crooked network executive who tries to undermine both their control over their show and Wayne's attempts to woo Cassandra Wong (Tia Carrere), a rock singer and bassist who also seeks to make her fortune in show business.

Wayne's World received mostly positive reviews upon release and was commercially successful (just like every Saturday Night Live-based film up through Ladies' Man). It was followed by Wayne's World 2 (1993), which featured Christopher Walken as record producer Bobby Cahn. The second film was a modest box office hit. It earned about 48 million dollars in the United States market, where it was the 28th most successful film of its year. In 2000, readers of Total Film magazine voted Wayne's World the 41st greatest comedy film of all time.

These movies contain examples of:
Retrieved from "https://allthetropes.org/w/index.php?title=Wayne%27s_World&oldid=1752342"
Categories: