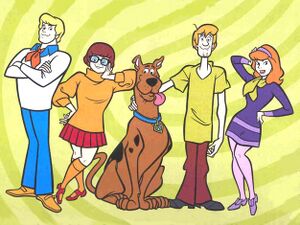 The gang as they appear in What's New, Scooby-Doo?

The original Breakfast Club, a popular Saturday Morning Cartoon from Hanna-Barbera that premiered in 1969 and lasted in various forms up to the early Eighties (and episodes are again being made today) featuring four teenagers (Fred Jones, Velma Dinkley, Daphne Blake and Norville "Shaggy" Rogers) and their talking dog Scooby-Doo (a classic Speech-Impaired Animal) in a van called the Mystery Machine. Each episode they'd encounter a mystery involving some form of spooky supernatural monster which would more often than not turn out to be a hoax meant to frighten the locals away from the villain's real operation, and which would be resolved at the end by unmasking the villain, who would inevitably utter "I would have gotten away with it if it hadn't been for You Meddling Kids, and that dog too." Reportedly also full of drug references (hey, it was The Seventies), depending on how you read it (what the hell do they put in those Scooby Snacks, anyways?).

Since the 1970s there have been many incarnations, including several direct-to-video movies, a series with real ghosts called The 13 Ghosts of Scooby-Doo and a series with prepubescent versions of the cast. One such incarnation added Scooby's nephew Scrappy Doo (a classic Talking Animal) to the cast, which was when the franchise as a whole is considered by some to have Jumped the Shark. (Mark Evanier, who wrote the pilot episode of Scooby & Scrappy-Doo, told a crowd at San Diego's Comic-Con of how people thought Scrappy ruined Scooby-Doo, to which he would reply, "It's Scooby-Doo. How do you ruin Scooby-Doo?") After that point the show frequently operated with just Shaggy, Scooby and Scrappy. Daphne often came along for the ride due to Popularity Power at the time. The show has stayed on the air in all its various incarnations because it is consistently the most popular show of choice by focus groups of six- to eleven-year-olds.

Scooby-Doo is so thoroughly embedded in American popular culture that the ad-hoc vampire-hunting team that formed around Buffy Summers in Buffy the Vampire Slayer called themselves "The Scooby Gang". (The Scooby-Doo kids never refer to themselves as such; their name in the pilot script is "Mystery, Inc." It has also become Cockney Rhyming Slang for "clue" (as in "Haven't a Scooby, mate").

In the early 2000s it was made into a trilogy of live-action movies (starring Sarah Michelle Gellar of Buffy the Vampire Slayer fame as Daphne and her husband Freddy Prinze Jr. as Fred). The first two movie were theatrical films, the third (which was a prequel and featured a different cast) went straight to video. These were loaded with Continuity Nods, and lampshaded the show's own clichés.

In 2005, the show briefly beat The Simpsons for most episodes produced of an American cartoon.

The most recent[when?] incarnations are What's New, Scooby-Doo? (A modernized return to the mystery format) and Shaggy & Scooby-Doo Get a Clue! (which is much flatter animation-wise and rather weird, featuring nanotech Scooby snacks and a message from Fred [no relation] in the title). A new series called Scooby-Doo! Mystery Incorporated premiered July 12, 2010 (containing possible character development, an overarching plot, and a Darker and Edgier feel).

And too many Direct to Video animated features to list, but we did so anyway.

Hilariously subverted in the What's New episode "It's All Greek To Scooby" when Velma triumphantly announces the identity of the Centaur and pulls the mask off...to reveal a character she had never seen before. Velma calls a foul and declares it doesn't count.
A subversion played straight occurs in the classic series episode "A Clue For Scooby-Doo." Fred and the gang are about to unmask the Ghost of Captain Cutler to see if it was really Ebeneezer Shark (the beachcomber they interrogated earlier). It turned out to be--thanks to Shaggy's placement of some seaweed--Captain Cutler himself. (Scooby and Velma were the only others to have recognized this denoument, but Fred and Daphne announce it as well, and they weren't even at Widow Cutler's home to have seen the Cutler portrait.)

Tropes used in Scooby-Doo (animation) include:

Also Bravo Dooby Doo, an extremely on-target spoof where Johnny Bravo crossed paths with Mystery Inc.
As well, The Scooby Doo Project, a series of interstitials from 1999 spoofing "The Blair Witch Project." Plus Daphne appeared as a member of the Hanna-Barbera tribe in Cartoon Network's "Staylongers" (spoof of "Survivor") interstitials.
A not-so-affectionate parody: "Ring-a-Ding, Where Are You?," one of the shows to which Mighty Mouse gets juxtaposed in the 1988 episode Don't Touch That Dial from his Bakshi-produced TV show.

When Scooby runs in the early series, his legs don't follow a normal dog's running pattern. Each pair of legs go alternately in a circular motion. The only episode showing him running like a normal dog was "Decoy For A Dognapper," as he and the freed kidnapped dogs run after their captor.

Zig-zagged: The pilot episode of Scooby & Scrappy-Doo ("The Scarab Lives!") was loosely based on the first story of Scooby-Doo Mystery Comics #24 (Gold Key/April 1974, "Mark Of The Blue Scarab").
Starting in October 2010, the DC comic began billing itself as Scooby Doo, Where Are You!, the first time the comic has been billed as such since October 1976.
Gold Key, known for taking continuity liberties, started making the gang ghost breakers for hire starting with issue #14. If this continuity is to be followed as any sort of canon, then issue #21 has the gang with the following Zodiac signs: Scooby--Aries, Fred--Pisces, Shaggy--Leo, Velma--Virgo, Daphne--Gemini. Charlton's stories are best left undiscussed.

When anything is colored differently than the other things in the scene (and isn't supposed to be), be it lighter or darker, someone will inevitably grab it or use it in some other way.
It may also follow that if doesn't have an ink (or xerox) line, it's the background. If it has the ink/xerox line, it's a waiting trapdoor.

The comic book adaptation of "Bedlam In The Big Top" (Gold Key #9, Dec. 1971, retitled "The Phantom Clown") retroactively subverts this--Velma is the hero of the story as she hypnotizes the clown with his own gold coin.
Shaggy and Scooby-Doo are secretly ninjas. In situations where they can't be the whimpering cowards, they pull amazing feats. In Scooby-Doo in Where's My Mummy?, they leapt from falling platform to falling platform to keep from plummeting to their dooms. Scooby-Doo and the Samurai Sword also counts towards this.

The new series, Scooby-Doo! Mystery Incorporated, although not much. It's definitely not cynical, but the universe as a whole is a little less idealistic, and the jokes, characters and events are more mature.

Velma, of all people in the episode Scooby Doo Meets Dick Van Dyke as she, Fred and Dick see Daphne having fun on a bump-'em cart:

This played with in the parody show Harvey Birdman. In the episode "Shaggy Busted." The Mystery Machine is seen smoking up (from an overheated engine, based on the original episode), and we hear Shaggy exclaim "Scooby... doobie!"

Oddly enough, it doesn't apply to the first few DTV movies (Zombie Island, Witch's Ghost, Alien Invaders, Cyber Chase) since the animation is quite lively and fluid. Nowadays it's back to looking pretty cheap. But a lot better than before.
Limited Animation is lampshaded in the 13 Ghosts episode "That's Monstertainment." Scooby appears in a mock-up of the MGM opening title sequence where it reads "Ranna-Rarrera" below it and "Limitus Animatus" around Scooby's face.

In the second live-action movie, she uses some tape and blush to trip a fingerprint-activated lock so they could escape from a cell that they're being held in. "I enjoy being a girl!"

In the direct-to-video movies Pirates Ahoy and The Goblin King, Shaggy is seen dressed up as Daphne and Scooby is dressed up as Velma.

This is lampshaded in one of the made-for-TV movies. Fred is seen getting dressed, and he puts on the orange tie he wore in his original outfit. He thinks about it for a few seconds, then says "Naaah," and takes it off.
Lampshaded in Scooby Doo and the Cyber Chase where the gang meet digital models of themselves from years earlier, who are still wearing the original outfits. For most of the segment, it's the only way to visually tell the two groups apart. Fred also gives himself a comment on the ascot.
The two made-for-TV live-action obviously deviates a a little from the gang's appearances -- Fred has dark hair. This is subverted and lampshaded in Curse Of The Lake Monster: Fred and Daphne pose as mannequins to lose the trail of the creature, and they are both done up as the original cartoon Fred and Daphne.

Mystery Incorporated subverts this, with their parents appearing frequently to try to get them to stop solving mysteries, because in this world that's what rebellious teens do apparently.

It happened even earlier than that. In The 13 Ghosts of Scooby-Doo, she turned in her purple dress for a jumpsuit and went off with Shaggy and Scooby to hunt down actual ghosts.

The message on the sheet music read, "Feed the organ and watch the floor," and Velma deduced that it meant the musical notes F-E-E-D, which she plays and a panel in the floor opens. As to which keys Scooby pushed to stop the walls, that is anybody's guess.

And after the ride in the bumper car, where is Scooby sitting in the jeep Velma is driving? Shotgun!

Retrieved from "https://allthetropes.org/w/index.php?title=Scooby-Doo_(animation)&oldid=1902945"
Categories:
Cookies help us deliver our services. By using our services, you agree to our use of cookies.