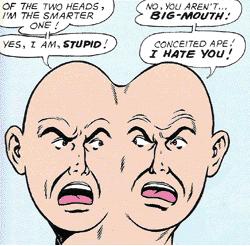 Whenever a creature has two (or more) heads and the ability to talk, each head will have its own distinct personality. In more comedic series, the heads will often argue with each other over which course of action to take.

Examples of Multiple Head Case include: