A Drug That Makes You Dream 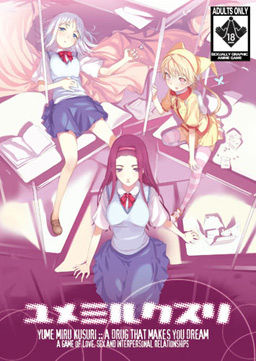 Kouhei Kagami is an Ordinary High School Student who also happens to be adopted but can't seem to fit in with his family even after living with them for most of his life. He feels he's going nowhere, forced to keep up the image of a model student when in reality he just wants to be left alone and do whatever he wants.

Over the course of the story, he meets three girls who all need his help: ostracized, introverted Aeka, cool and distant idol Mizuki, and "Cat Sidhe Nekoko", a mysterious girl who appears out of nowhere and throws his life into disarray. Each of the three possible routes has Kouhei dealing with one of the problems faced by many high school students in Real Life, such as bullying, drugs, and interpersonal relationships. Naturally you can't save them all so Kouhei must choose one and leave the others to their own fates, but such is the curse of being a Visual Novel protagonist. Yume Miru Kusuri also goes one step further and addresses some of the knock-on consequences of these problems like depression, suicide, family troubles and, in a rare twist for a Visual Novel, pregnancy.

Beneath all of its humor and heartwarming moments, Yume Miru Kusuri is a rather dark game and doesn't shy away from dropping some anvils regarding social issues and conventions that some Visual Novels take for granted, although Some Anvils Need to Be Dropped. It also has its fair share of surreal moments.