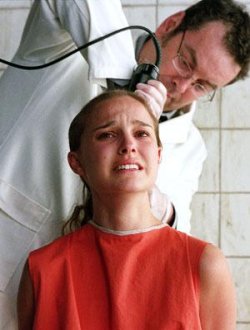 Just a little off the top...

Jewelry, vast wardrobes, and facial beauty are not the most prized possessions for some societies and individuals; instead, it's... Hair Tropes.

Whether it's good or evil, a person's hair comes to symbolize honor, social station, and otherwise serves as a human peacock tail, representing a life rather than a fashion statement. Thusly, having it forcibly cut off isn't just a minor fashion faux pas, but akin to rape; and is likened to having your life stolen from you. From another view, a forced haircut serves as the symbolic initiation of worse things to come.

A minor subtrope involves hair being the source of a hero's powers (or in modern tales, an emotional anchor) that when cut off renders a hero vulnerable and powerless.

Compare Important Haircut, where it is often self-induced to indicate a change in values or goals, and Expository Hairstyle Change for when there's any hairstyle change that also indicates a change in character. See also Scars Are Forever and Beauty to Beast for the grisly body part version, as well as the milder and more comedic version, Nobody Touches the Hair. If this gets Played for Laughs then it's a Gag Haircut though it does overlap with this since it can still be traumatic for the character.

Examples of Traumatic Haircut include: