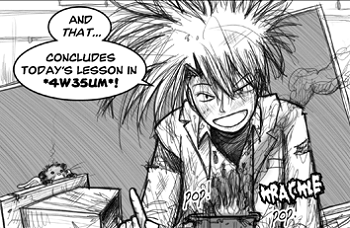 He'd have worn a hazmat suit, but he's too awesome for that.

"Awesome" is a hazardous substance in fiction. Put too much of it together, and dangerous things can happen. Things will blow up, heads can explode/implode, or even the universe could end, all for no other reason than the awesomeness itself caused it.

Probably first created by the Rule of Funny.

Examples of Awesomeness Is Volatile include: