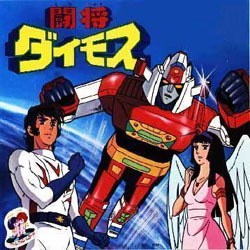 Toushou Daimos (or just Daimos) is the third entry of Tadao Nagahama's Romantic Trilogy (or often shortened the Nagahama Romance), preceded by Voltes V, which is in turn preceded by Combattler V.

Daimos tells the story of Earth being invaded by a race of Winged Humanoids called the Brahmins/Balmians, all due to failed peace negotations that took a great toll on both sides. The Earth is outmatched, but they have hope in form of the Motion Capture Mecha Daimos, piloted by the Karate champ Kazuya Ryuuzaki. But problems arise when Kazuya himself meets a mysterious girl named Erika, and falls in love... and later finds out that she is the Princess of the Brahmins, and the sister of the head of the invaders, Prince Richter, to boot.

Just like its predecessor Voltes V, Daimos features alien enemies that turn out to be Not So Different, though it still follows the Monster Of The Week formula.

Daimos is also one of the series often included in Super Robot Wars, and should there be any chance that it is together with G Gundam... expect Kazuya to have some rivalry with Domon Kasshu.