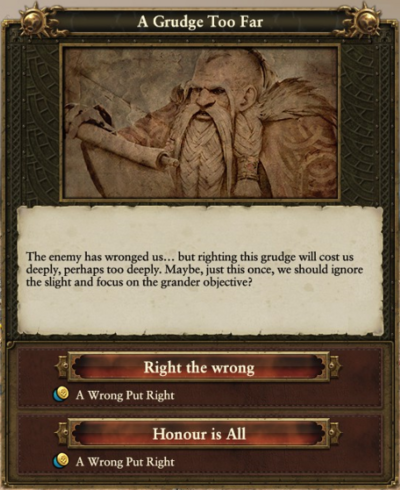 Some people can be so filled with the need for Revenge, to the point of endangering themselves and others.

This is mainly a villain trope, not the least of which because the revenge tends to be Disproportionate Retribution cause by the most minuscule of Rant Inducing Slights. If the level of vengeance is taken to a downright ridiculous level, one may end up asking Why Don't Ya Just Shoot Him rather than waste time and resources towards humiliating or torturing the person before killing them or making sure that they die horribly in some slow, easily escapable death trap.

Yet heroes can fall into this, showing that even they aren't immune to this flaw.

This includes cases where The Atoner is willing to make amends, or the character is vitally needed for some other good cause.

Often invokes Taking You with Me. If the character snaps out of it, can lead to Was It Really Worth It? and My God, What Have I Done?.

Compare Honor Before Reason, Roaring Rampage of Revenge, He Who Fights Monsters.

Examples of Revenge Before Reason include:

Retrieved from "https://allthetropes.org/w/index.php?title=Revenge_Before_Reason&oldid=1848160"
Categories:
Cookies help us deliver our services. By using our services, you agree to our use of cookies.