That Man Is Dead 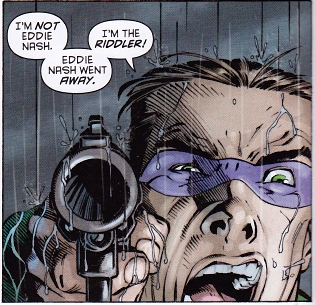 Stock Phrase uttered by someone who's been completely subsumed by their alter ego. The idea is that they have completely abandoned their past lives to the point where they wouldn't even recognize themselves. It's almost always a major turning point for the character, though there are a few cases where it merely emphasizes what the audience has already observed.

If a genuine hero utters it (though they generally use one of the variations below), it's because their past life was naive, evil, or selfish, and it's a sign that they've overcome their problems in the beginning and are ready to ascend to the grand finale. If an Anti-Hero utters it, it's to emphasize their dark (or at least rebellious) nature. If a villain utters it to another villain, it's to show that they're Eviler Than Thou.

Finally, if a villain utters it to a hero (particularly if they've done a Face Heel Turn, though usually their past life is relegated to Backstory), it determines their fate: If they speak this line with contempt, then they're irredeemable and will die; if they speak it with regret, then The Power of Friendship will prove them wrong and... well, they'll probably die anyway, but they'll feel better about it.

Occasionally, mentioning the old life may be a Berserk Button. If a Split Personality is involved, then it's a Split Personality Takeover. Very common when somebody is Becoming the Mask. If they ever purposefully mention their previous life, they will remark that No Doubt the Years Have Changed Me.

It may be inverted when the character gives up his second identity, and embraces his basic civilian life. The quote then is something like "I'm not Captain Righteous anymore, I'm just Joe".

Compare Do Not Call Me "Paul".

Examples of That Man Is Dead include:

Retrieved from "https://allthetropes.org/w/index.php?title=That_Man_Is_Dead&oldid=1914521"
Categories:
Cookies help us deliver our services. By using our services, you agree to our use of cookies.