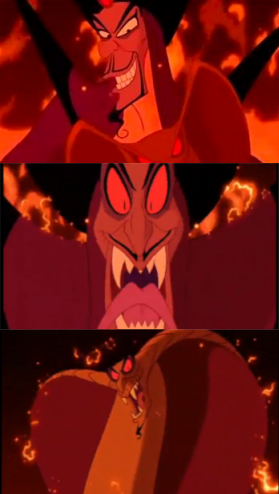 "A snake, am I? Perhaps you'd like to see how sssssnakelike I can be!"

There's probably something symbolic about the tendencies of a villain to turn into a snake. In the West there is a strong established symbolism for snakes from The Bible (most famously the serpent in the Garden of Eden, although some translators believe that the original text may have indicated that the creature was closer to a dragon than a snake), Norse Mythology, and there's Orochi in Japanese mythology. Adding onto this, there is the fact that when walking in the wild, it's generally not a good idea to stop and pet a snake.

Of course, the result of all that symbolism is that when a villain turns into a snake there can be no doubt about the evil nature of a foe, and it gives The Hero a comfortably scary and suddenly less human foe to kill.

Villains do love their symbolism and cliches, however, so despite how often this trope tends to end with the villain chopped up on the hero's sword, (usually rather easily too) villains everywhere still love the order Squamata because, of course, Reptiles Are Abhorrent. Think about it for a second: how often have you ever seen a villain turn into, say, a bear, a rhino, a lion, a koala, or something else that would actually be useful?

In short, a specific and much overused variant of One-Winged Angel.

For when the character becomes larger in scale compared to what he or she was before, see Attack of the 50-Foot Whatever.

Examples of Scaled Up include:

Retrieved from "https://allthetropes.org/w/index.php?title=Scaled_Up&oldid=1856475"
Categories:
Cookies help us deliver our services. By using our services, you agree to our use of cookies.