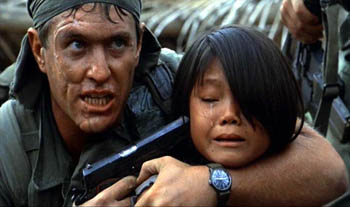 The grunt version of Colonel Kilgore (and sometimes General Ripper). Often people below the rank of Sergeant are all around assholes who plunder, rape, and massacre civilians, or brutally torture and murder the hero's comrades, making killing them less guilt-causing.

These generally come in four flavors:

If there's a whole bunch of them, expect a Colonel Kilgore or General Ripper in charge.

Occasionally the rest of the soldiers will be relatively sympathetic but one of these will be the Token Evil Teammate.

Contrast Officer and a Gentleman and Cultured Warrior. Compare with the more mercenary Psycho for Hire. Compare and contrast Shell-Shocked Veteran.

Examples of Sociopathic Soldier include:

Every war, ever, has examples of this show up on all sides. Some have more, some have less, but no one has none. The amount varies widely depending on a whole range of factors, with the most important one usually being whether such behavior is shunned, ignored, or outright encouraged by military higher-ups and politicians (with countless examples of all three options). Scientifically tested here, especially the second page. Also, relatedly, this article.

Retrieved from "https://allthetropes.org/w/index.php?title=Sociopathic_Soldier&oldid=1518269"
Categories:
Cookies help us deliver our services. By using our services, you agree to our use of cookies.