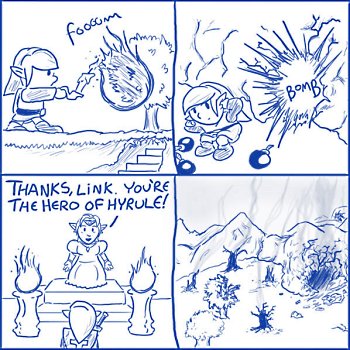 Perhaps this is what happens in The Legend of Zelda series.

Basically, Terrifying Rescuers who cause about as much damage, more or less, as the threats they save the day against.

Say a hideous monster is terrorizing the town. All seems lost, until the Big Damn Heroes arrive. They beat the monster down, and the whole village celebrates with them.

... What the hell? The heroes fought the monster and defeated it soundly, but they just smashed the place to pieces during the battle.

Well, no one was killed, but these people are barely better for the town than the monster. Some saviors.

Yes, some heroes have bad luck enough to cause significant destruction, often more than the villains. It could be by complete accident, not caring, being a Sociopathic Hero or a combination of the three. Either way, you're better off moving away, no matter the outcome. And don't expect any Hero Insurance to cover this. Insurance companies blacklist this kind of hero.

Often this comes from careless use of the powers of a Person of Mass Destruction, but often it's just a tendency to cause Disaster Dominoes.

Compare What the Hell, Hero?, when the heroes get called out for ruining the town. If the destruction that happens truly isn't the hero's fault, then he's just a Walking Disaster Area. If the situation was already disastrous beforehand and he can't possibly make things that much worse than they already are, then he's justified through the Godzilla Threshold. Sometimes this is the practical result of Summon Bigger Fish. A Willfully Weak character may become one, often after a World of Cardboard Speech.

Examples of Destructive Saviour include:

Retrieved from "https://allthetropes.org/w/index.php?title=Destructive_Saviour&oldid=1814750"
Categories:
Cookies help us deliver our services. By using our services, you agree to our use of cookies.