Say It with Hearts 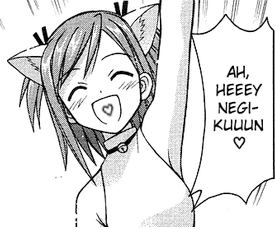 Makie wears her heart on her sleeve...and her tongue?

Sometimes characters will use a Heart Symbol (♥ or ♡) in their speech bubbles, or sometimes dead-centre in their mouth. This is supposed to indicate their tone and show that they are Genki Girl or a Kawaiiko, that or they are squeeing like mad about something. Sometimes they're just talking in a sing-song manner and sometimes they're reacting to something that happens to feel really good.

However, sometimes it is done sarcastically by a much less enthusiastic character, or used in an inappropriate sentence in order to add an element of extra creepiness to a spooky person. Sometimes it is even Lampshaded when other characters mention the hearts, usually with a line like, "Don't say that with a ♥!".

Related to Lucky Charms Title, and more distantly to Wingding Eyes. A lighter variant is to use a music note to connote sing-song or facetiousness.

Examples of Say It with Hearts include: