King of All Cosmos 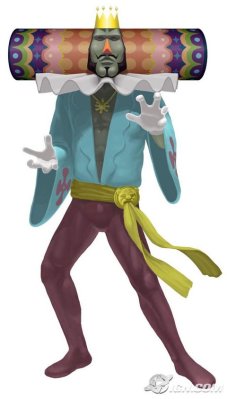 We are most pleased to find a trope page named after Us.[1]

God is a comedian, playing to an audience too afraid to laugh.
—Voltaire

A deliberately bizarre or unusual portrayal of gods (especially the Christian God), usually without the intent of being deliberately offensive. This goes well past using a woman or a minority (or both -- Whoopi Goldberg has played God at least once).

This may have something do with the cliches often associated with God, and the use is sometimes a soft commentary of humans assuming the nature of gods and the so-called superior place humans have in the universe.

The King of All Cosmos frequently mentions that he (or she) is not omnipotent.

The secular nature of Japan typically translates to this being applied to nearly all kami at some point.

See also Celestial Bureaucracy and Crystal Dragon Jesus. Not to be confused with the King of All Media.

Examples of weird depictions of gods include:

Supreme Being: "I think it has something to do with free will."

H.P. Lovecraft: They danced insanely to the high, thin whining / Of a cracked flute clutched in a monstrous paw / Whence flow the aimless waves whose chance combining / Gives each frail cosmos its eternal law.

He's got a watch with a minute hand
Millennium hand and an eon hand
And when they meet it's a happy land
Powerful man, Universe Man