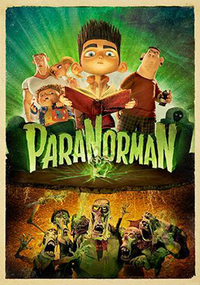 ParaNorman is a stop-motion animated comic horror film from Laika Animation Studios -- better known for their success with Coraline -- and based on the book of the same name by Elizabeth Cody Kimmel, that was released in August 17, 2012. It was directed by Chris Butler (the main storyboard artist on Coraline) and Sam Fell (an Aardman alumni and director of Flushed Away), based off a script written by Butler.

The film follows the titular protagonist, Norman (voiced by Kodi Smit-McPhee), living in a small town in Massachusetts. With the "gift" of speaking to the dead, Norman is called an outcast by most of the town, most of which populated by childish adults and a nasty population of kids. When the town comes under siege by zombies, ghosts and witches, only he can actually save the town from these creatures, not to mention a centuries-old curse on the town.

Tropes used in ParaNorman include:
Retrieved from "https://allthetropes.org/w/index.php?title=ParaNorman&oldid=1960631"
Categories:
Cookies help us deliver our services. By using our services, you agree to our use of cookies.