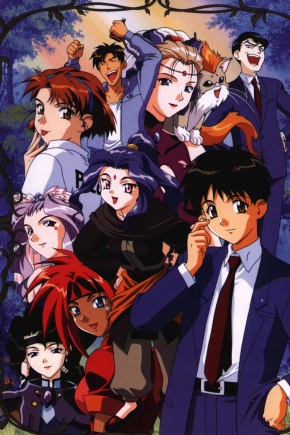 When he awakens a beautiful woman entombed in a mysterious chamber discovered under his high school, Makoto Mizuhara finds himself (along with several other people) catapulted across dimensions to the world of El-Hazard. Once the site of an unimaginably advanced civilization that destroyed itself in an apocalyptic war, it is now home to a culture that resembles the Arabian Nights, sprinkled here and there with the remnants of ancient ultratechnology.

Once there, Makoto and his teacher, Masamichi Fujisawa, find themselves on the front lines of a Bug War between the human lands and the Bugrom, a civilization of immense insects. Makoto's life is complicated by his uncanny resemblance to a missing princess, whom he is drafted to impersonate. Meanwhile, Makoto's friend Nanami Jinnai is dropped in the middle of a desert; his arch-enemy, Nanami's brother Katsuhiko, finds himself among the Bugrom.

As Makoto, Mr. Fujisawa and Nanami struggle to help Roshtaria, their new home, defend itself, Jinnai falls into the role of a military messiah to the Bugrom and begins leading them to victory after victory. Only the threat of the Eye of God, an unimaginably powerful weapon controlled by the royal family of Roshtaria, prevents the Bugrom from overrunning the human lands, but when Jinnai finds a disturbingly familiar superweapon of his own, matters begin to come to a head.

Meanwhile, the visitors from Earth learn that the transit to El-Hazard has changed them in unexpected ways, even as they discover that there is a secret, third side to the war. Add to that the revelation that there is more to Jinnai's superweapon than just a means of massive destruction. Plots revolve within plots, and victory may become defeat. Throw in a time loop, lovers separated, family reunited, a trio of elemental priestesses, an indiscriminately amorous teenaged lesbian and some broad comedy leavening the drama, and you have the makings for one of the better anime "miniseries".

El-Hazard is noteworthy for being one of the first anime whose English dub is considered superior to the original Japanese voice work. In fact, the director and other members of the production team consider the English cast to be the definitive voices of the characters, far superior to their Japanese counterparts. The animation is first-rate, and it has a lush orchestral soundtrack that perfectly evokes the "Arabian Nights" feel of the world.

An OVA, El-Hazard was remade/expanded into a TV series called El-Hazard: Wanderers. This series generally followed the same plot outline, but there were significant changes to some of the characters, including a severe tuning-down of the lesbianism (though the hints are there if you look). The OVA version itself had two sequels: El-Hazard: The Magnificent World 2 (short and not bad, though not the equal of the original), and El-Hazard: The Alternative World (which was Cut Short, running to only 13 of its planned 26 episodes).

There is also a manga, which is mostly the first OVA with some of the characterization from the first TV show.

Tropes used in El-Hazard: The Magnificent World include:
Retrieved from "https://allthetropes.org/w/index.php?title=El-Hazard:_The_Magnificent_World&oldid=1717050"
Categories: