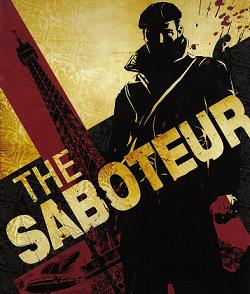 "What's an Irishman doing in Paris?" It's kind of a long story.

The Saboteur can be summed up simply as Mercenaries but with Those Wacky Nazis or as Assassin's Creed meets Grand Theft Auto; though that's a bit simplistic. The Saboteur is a Wide Open Sandbox game set in Gay Paree during World War II.

The player takes on the role of Sean Devlin, an Irish mechanic turned race car driver turned saboteur, as he attempts to avenge his friend's death and roll back the Nazi occupation. One of its most distinctive features is that the Nazi-occupied sections of the city are black and white (with occasional red and blue), presumably inspired by Sin City, while sections where Sean has effectively disrupted the Nazis' control are fully colored, and the citizens will aid Devlin in his fight.

Sadly for fans of Pandemic Studios, the game proved to be their "swan song" and EA promptly liquidated them soon after, a move that unsurprisingly lead to untold hate directed towards EA not helped in the least by the fact that Pandemic was only bought over due to its past success, only to cease to exist under its new owners.

The game also became notable in that it's incentive for buying it new over pre-owned was literally a code for topless strippers.

Tropes used in The Saboteur include:

Dr. Kwong: The cannon's massive barrel thrusts into the sky above Paris like an engorged pillar of masculine flesh! While the women of the city cower in the eclipsing shadow.

Sean This reminds me of when I tried to make breakfast.

My son. In the name of all there is holy: Blow his fucking head off!
Go now, my son! The Lord will be my shield, but He expects you to save your own ass!