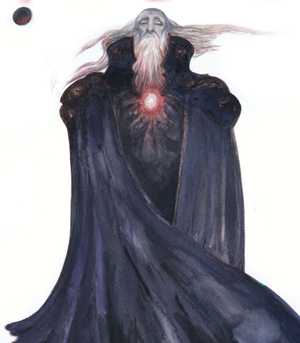 Get off his lawn, or he'll suck the soul out of your planet.

Some people grow old gracefully, and sit back to enjoy the last few years of their life. Others want to spend their final days as the supreme ruler of all humanity. Not all senior citizens can be kind, loving grandparents, or old masters. Some are just as evil in their old age as they were in their youth, and still want to destroy everything, conquer the world, or generally be evil.

To qualify for this trope, a character must be old (by their species' standards), and must also be visibly aged. Even if they're Really Seven Hundred Years Old, it doesn't count if they look like a ten-year-old child. Just being a cranky old man is not enough to qualify one as evil, either. World domination, death to humans, or anything else that could be pulled off by younger villains are all suitable goals to make one qualify as an Evil Old Folk. If they happen to be really old and remain young by stealing the youth of others, it can count so long as they occasionally look old.

So next time Mr. Jenkins next door yells at you to get off his lawn, you might want to listen—he might be hiding a death laser under his rocking chair.

See Liquid Assets for evil old folks who look young by stealing the youth of others. Compare Cool Old Guy, Dirty Old Man, Grumpy Old Man. See also Silly Rabbit, Idealism Is for Kids and Jade-Colored Glasses. For old folks who were evil when they were your age, try Retired Monster.

Examples of Evil Old Folks include: