Everything About Fiction You Never Wanted to Know.
(Redirected from With All Due Respect)
Jump to navigation Jump to search 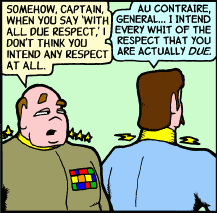 "Why is it that whenever someone says 'with all due respect', they really mean 'kiss my ass'?"
—Ashley Williams, Mass Effect

In an unquestionably hierarchical situation—often with legally enforceable prerogatives—a junior argues with a senior.

The junior has very good odds of being right, since he is confident despite what his senior thinks, or says he thinks. The more diffident the junior is about making the objection, the more likely it is that he is right (and objecting out of the purest sense of duty). Sometimes the junior merely keeps his complaints to himself, and his displeasure is merely manifested non-verbally. The senior may have to order him to express his views—repeatedly; he may decline "with respect" the first time.

Conversely, may sometimes be used to show that the senior is about to engage in a reckless or not-by-the-books action.

The Bad Boss will view this with disfavor, even if he ordered it; a Benevolent Boss will take it as a sign of good spirits and sense in the subordinate. If he slaps it down and his superior is present, the odds are good that his superior will approve, and insist on it. This can lead to some interesting tensions afterward.

A common Military Trope. Fire Forged Friendship may lead to this; the junior having won the superior's respect in combat, the superior will listen.

The Old Retainer is prone to it, because criticism must be delivered properly. Other servants may also engage in it.

The Stock Phrase had variants, include "With respect" and "With all due respect." When followed by some slang or curse words, the result can be Sophisticated As Hell.

Compare You Are in Command Now, where a junior may accidentally give a senior an order, and Friend or Foe, where the junior does not know whether the senior is who he claims to be. See also My Master, Right or Wrong where the junior's sense of ethics (or sometimes just his sense) constantly clashes with the senior's lack thereof, though he still follows. Often said by a despairing Commander Contrarian. See also Rebellious Rebel, where this may occur in the lead up to the rebellion.

Contrast Right in Front of Me. See also That's an Order.

Examples of With Due Respect include:

Officer: We have been waiting for you, Mr. Darlian. A military car is waiting for you outside. Please proceed quickly.
Darlian: Right away? That won't do. I have some things to take care of first for my daughter's birthday.
Officer: I have arranged for a separate car to take your daughter.
Relena: (curtsying) Don't trouble yourself about me. I'm quite capable of finding my own way home.

"Why is it, sergeant, that whenever I hear 'With respect, sir', I know there's insubordination coming?"

Jeanette: Blake, please inform our leader in the most polite and respectful of terms that I am not following his order.
Catman: Bane, Jeanette says to go **** yourself!

Next - speaking with all submission and reverence - I do not purpose to let myself fall be low the race of my ancestors, who from all time have been famous and illustrious, nor do I wish to debase the crown you wear by taking for a husband one who is our inferior. You, my beloved father, have begotten four daughters, of whom you have married three in the most honourable fashion to three mighty kings, giving with them great store of gold and wide domains, but you wish to dispose of me, who have ever been obedient to you and observant of your precepts, in an ignoble alliance. Wherefore I tell you, to end my speech, that I will never take a husband unless I can be mated, like my three sisters, to a king of a rank that is my due.

Deputy Marshal Samuel Gerard: Sheriff Rawlins, with all due respect, I'd like to suggest check points on a 15 mile radius out here on I-57, I-20 and on route 13 out of Chester...

Kathy Williams: Sandy, you're the only person I know who can make "Yes, Ma'am" sound like "screw you".
Sandy Fedel: Yes, Ma'am.

Ricky: With all due respect, I didn't know you underwent an experimental procedure to have your balls removed.
Dennit: ...excuse me?!
Ricky: I said "with all due respect".
Dennit: That doesn't mean you get to say whatever you want to me.
Ricky: Yes it does! It's in the Geneva Convention! Look it up!

Eunice Bloom: "With all due respect"... man, I hate it when people say that because it is inevitably followed by a disrespectful remark. Here, let me give you an example: With all due respect detective, this matter falls under whatever jurisdiction I fuckin’ say it does.

Rose: You're crazy!
Jack: That's what everybody says but with all due respect, miss, I'm not the one hanging off the back of a ship here.

Dodge: Since when did the rules ever apply to you?
Graham: Watch it! Don't you realise that you are addressing a superior officer?
Dodge: No, merely a higher ranking one.

Gene Kranz: With all due respect, sir, I believe this is going to be our finest hour.

Sir, without wishing to appear impertinent, are you sure that's the right choice?

Jellico: Just once I'd like it if someone coupled the phrase 'with all due respect' with some sort of sentiment that was genuinely respectful.

"I assume that was said with all due respect?"
"Oh, absolutely, sir".

"Trust me, Captain," Pellaeon said, trying hard not to smile as his mind suddenly flashed back ten years. Then, he'd been the earnest captain standing on this same deck, trying in the most diplomatic way possible to make his superior see sense in the middle of a tense combat situation. [...] And yet Thrawn had never reprimanded him for his impertinence and lack of understanding. He had merely continued calmly with his plans, allowing the results to speak for themselves.

Crespin: "After due consideration and review, I think it's a terrible idea."

"I don't want to seem always to be criticizing your methods of voice production, Jeeves," I said, "but I must inform you that that 'Well, sir' of yours is in many respects fully as unpleasant as your 'Indeed, sir?' Like the latter, it seems to be tinged with a definite scepticism. It suggests a lack of faith in my vision. The impression I retain after hearing you shoot it at me a couple of times is that you consider me to be talking through the back of my neck, and that only a feudal sense of what is fitting restrains you from substituting for it the words 'Says you!'"

Renner: Wrong!
Blaine: The tactful way, the polite way to disagree with the Senator would be to say, 'That turns out not to be the case.'
Renner: Hey, I like that. Anyway, the Senator's wrong.


Later in the book, Renner disagrees with a higher authority, starting out by saying "That turns out not to be the case."

George Steinbrenner: Nice to meet you.
George Costanza: Well, I wish I could say the same, but I must say, with all due respect, I find it very hard to see the logic behind some of the moves you have made with this fine organization. In the past twenty years, you have caused myself, and the city of New York, a good deal of distress as we have watched you take our beloved Yankees and reduced them to a laughingstock, all for the glorification of your massive ego.
George Steinbrenner: Hire this man!

Jack Bauer: With all due respect, Mr. President, sixteen hours ago your people were willing to hand me over for dead, and I did not hesitate.

Mayor Laskov: With all due respect, sir, I don't think Colonel Smith's unorthodox strategies will be very effective in the face of a court martial. The A-Team will discover that the element of surprise is ours this time.

Michael Vaughn: Jack, he just lost his wife. I mean, with all due respect, why are you fighting with me on this?

Greg Sanders: Well, with all due respect, sir, it's not a baked potato.

Lister: With all due respect sir, what's in it for the cat?

Rimmer: With respect, sir, you've got your head right up your big fat arse.

Commander William T. Riker: With all due respect, sir - you need me. Particularly now.

Chief O'Brien: With all due respect sir, we -- we weren't brawling.

Dr. Bashir: With all due respect, are out of your mind?!

Captain Kathryn Janeway: With all due respect, Dr. Frazier, you were one harmonious family bent on the violent assimilation of innocent cultures.

Daniel: Sir, with all due respect, the good senator is an ass.

Well, with no due respect, General, that's just plain stupid.

Carter: With all due respect, sir, [insert technobabble here].

Humphrey: And, with respect, Minister-
Hacker: Don't-don't use that filthy language to me, Humphrey.
Humphrey: Filthy language, Minister?
Hacker: I know what "with respect" means in your jargon. It means you're just about to imply that anything I'm about to suggest is beneath contempt.

Inspector Frost: With all due respect, sir...
Superintendent Mullett: (butting in) There's no respect at all in your voice when you say that, did you know?

Posca: With all respect, sir, but until the will is ratified I am bound to serve the Julii and I must request that you not forcibly remove my mistress. With all respect.

Ally: I mean, with all due respect, you sort of walk around with uppity breasts...and the hair flips aren't the most subtle...and your perfume! You could be flammable! Now what if somebody shut you down as a safety hazard. How would you feel then?
Elaine: That was with all due respect??

Karen: I know you're my superior, so I say this with all due respect. How stupid are you?

[while choking him] 'With all due respect'? Oh, I am due a lot more respect than that.

Tony: All due respect, you got no fuckin' idea what it's like to be Number One. Every decision you make affects every facet of every other fuckin' thing. It's too much to deal with almost. And in the end you're completely alone with it all.

Taub: With all due respect--
House: None taken.

Doc Bryan: Are you asking me to speak frankly, sir?
Encino Man: Yes, well...
Doc Bryan: Well, sir, it's just that you're incompetent, sir.
Encino Man: I'm doing the best I can.
Doc Bryan: Sir, it's not good enough.

Dilbert: "I'd like permission to keep a plastic plant in my cubicle."
Cubicle Police:: "Permission denied! Plants attract bugs! If I can't tell it's fake how will the bugs be able to tell?"
Dilbert: "With all due respect, bugs are way smarter than you."
Cubicle Police: "Oh yeah? I'd like to see them do this job!"

Joey Mousepad: With all due respect, Donbot, I don't think we should rely on an accident to happen. Let's kill him ourselves.

Iago: With all due respect, Your Rottenness, couldn't we just wait for a real storm?