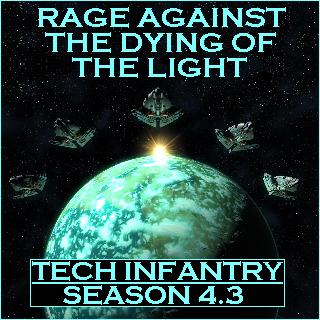 Do Not Go Gentle Into that Good Night

Tech Infantry is a fan-created Tabletop RPG that is sort of an expansion pack to the Old World of Darkness games published by White Wolf Publishing. It originally used the basic game mechanics, backstory, and rules of the original World Of Darkness... but was set in a 21st century world that borrowed just as heavily from Starship Troopers by Robert A. Heinlein and Armor by John Steakley. So you end up with werewolves, Mages, and Vampire Ghouls in Powered Armor fighting Giant Alien Bugs In Space!

The first few versions of Tech Infantry were played as Tabletop RPG campaigns, but once the original creators left college and went their separate ways, they decided to keep playing, after a fashion, by turning it into an online play-by-email cooperative novel writing project. Since then, the game has gone back and forth between being a Tabletop RPG and an online novel project. Stories set in the Tech Infantry universe stretch in time over several centuries and quite a large chunk of the galaxy. These later stories are mostly organized into "seasons" in conscious imitation of Myth Arc-heavy television series such as Babylon 5. Seasons are further divided into "episodes", and episodes into four "acts" each, with each act including a few pages of story each about several "player characters". Separate authors wrote the stories for each player character, with one overall editor then editing together these stories or outlines into a somewhat coherent overall narrative, and sending the finished act back to the players so they could begin writing their stories for the next act. As players joined the project or left, characters and their plot arcs were introduced or killed off and dropped.

In the year 2001, a large asteroid crash-landed in Rio de Janiero, Brazil. Out of the hollow asteroid poured an army of insect-like aliens quickly dubbed "The Bugs", killing and devouring everyone in their path. There was only one way to stop them. A mage named Bruce Von Eisenstein traveled to Brazil with a portable satellite uplink, set up the camera, and in front of the camera confronted the Alien Bug Queen...and attacked it openly using obviously supernatural magic. The resulting paradox backlash, as billions of people all over the world saw incontrovertible proof of the existence of aliens and magic, created a sudden surge of magical energy that exploded, killing Von Eisenstein and destroying the entire Bug invasion force, leaving Rio De Janiero as a smoking crater. The invasion was defeated and humanity saved, but the surge of magic also awoke from their slumber the milennia-old progenitors of vampire bloodlines, who rose up to resume their ancient blood feuds and compete for dominance. Millions of otherwise-unmagical humans were suddenly awakened with magical powers as well, and the resulting chaos threw into the open the various ancient secret struggles for control between vampires, mages, werecreatures, and their various factions and sub-factions, all fighting for dominion over humanity. The resulting War of Gehenna lasted for decades, and when it was over, an uneasy peace was struck between the warring factions.

The clear winner, insofar as there was one, was The Technocracy, a group of scientifically-minded Mages who had previously tried to suppress knowledge of magic and thus weaken their magical opponents more than themselves. Technocracy-created starships would be built to spread humanity out among the stars, and track the Bugs back to their point of origin and destroy them. Vampires were exiled from Earth, to form their own Kingdom of Enoch on three worlds out on the rim of explored space. Werecreatures and Mages would be drafted into the Technocracy Infantry (known as Tech Infantry for short), and used to fight the Bugs and any other aliens encountered. The East Asian nations, whose local indigenous vampire clans and werewolf tribes had mostly sat out the War of Gehenna, refused to join the Newly-created Earth Federation and submit themselves to Technocracy control, and an uneasy Cold War resulted. Eventually, the Eastern Bloc agreed to cede their territory on Earth to the Earth Federation in exchange for several planets on the opposite rim of explored space from Enoch, and the lengthy process of evacuating the Asian population to the new colony worlds began.

Meanwhile, the Earth Federation moved out into space itself, attacking Bug colony worlds and conquering and resettling them with humans one by one. A secret mission by the Technocracy elders located Hodraida, the homeworld of the Horadrim, the nearly-extinct alien race who had created the bugs as a living biological weapons system and accidentally launched them at Earth in the first place. Rather than making peace, the Technocracy strike force kidnapped the few remaining children of the Horadrim and brought them back to Earth as prisoners and experimental subjects. Enraged at this attack, the Horadrim sent fresh waves of Bugs at human-controlled space, and the war heated up. Mere days after the final shipload of Asian evacuees left earth for the new Eastern Bloc Worlds, a second and even more gigantic Bug asteroid crashed into Earth, causing tidal waves and setting off a new ice age. Billions more died, and the survivors were evacuated to other recently-colonized human worlds in nearby space. Earth was abandoned to wait for the ice age to subside.

As the Bugs continued to be pushed back, further alien races were encountered. Several of them were driven extinct, caught between the twin pressures of the Human expansion and the Bug counter-offenses. Others, such as the Jurvain and K'Nes Tor, managed to hold off the Humans and eventually push them back in turn. Earth was secretly recolonized by the Resistance, a motley group of those opposed to the oppressive and totalitarian tendencies of the Technocracy-controlled Earth Federation Grand Council. Under pressures of alien wars from without and Resistance uprisings from within, the Earth Federation underwent a series of self-destructive civil wars, as various factions and leaders battled for power and control. Religious fanatics founded the Christian Federation in a group of worlds on the rim of human space, and started their Holy Crusade to cleanse the human race of heresy and forms of magic not deemed derived from God. Independent-minded settlers on another part of the frontier formed the Frontier Worlds Territory, a locally-autonomous area only loosely allied with the Earth Federation. Large portions of the Tech Infantry itself rebelled, under the leadership of Marshal "Auntie" Sarah Dunmeyer, but failed in their attempt at a military coup to put an end to the chaos, and only created further dissention and unrest. After a second coup attempt succeeded in killing the leadership of the Grand Council but failed to survive to replace them, former Tech Infantry Colonel Arthur Clarke, a weretiger, accepted temporary leadership of the Earth Federation, put down the remaining rebellions, and tried to begin the process of reform to avoid future civil wars.

But it was not to be. A new alien threat, the Vin Shriak, a race of Omnicidal Maniacs who had genetically engineered their own neanderthal-like ancestors into living suits of Powered Armor, invaded human space. Entire worlds were depopulated in the conflict, which was only ended when a new secret weapon the 3-D or Doomsday Device, was used to send the suns of planets in the Vin Shriak's core empire into supernova, wiping out the Vin Shriak homeworlds and cutting off their forward forces from resupply and reinforcement. The Vin Shriak were defeated, but the victory proved a Pyrrhic one. The Eastern Bloc was completely destroyed, and its depopulated worlds resettled with refugees from devastated planets elsewhere in the Federation. Neighboring alien races and the vampire-ruled Kingdom of Enoch invaded the weakened Federation, and had to also be defeated in turn. Finally, just as the Federation thought it could emerge from this dark period united as never before, the Caal invaded. Disembodied ghosts of a long-extinct alien race bent on an omnicidal conquest of the galaxy, the Caal tore through the Federation's defenses like they were nothing. Only a miracle could save the Federation...so a miracle was provided. Vin Dane, an alien given human form through genetic engineering and nanotechnology, acquired a magical artifact known simply as The Orb. With the Orb, he defeated the Caal, and afterwards a grateful populace declared him a God-Emperor of a new Holy Terran Empire by popular acclamation. But other powerful interest groups took advantage of the ensuing chaos to declare independence or attempt to restore the former Federation government, and a new civil war began.

Most of the above is mere backstory for the actual plot of the Tech Infantry stories, which are set in various eras, from the early expansion of humanity after the end of the War of Gehenna, to the era of Civil Wars prior to the Vin Shriak Crusade, to the chaos of the founding of the Holy Terran Empire. There's even an entire season set in an alternate universe, where the Vin Shriak destroyed the Federation and it was the Eastern Bloc which picked up the pieces and became the Middle Kingdom. Two other popular eras for authors are "Y3K", a Distant Finale era set a thousand years after the main plot arcs, and "Tech Infantry: Exodus", an Aborted Arc Spin-Off story set in a colony world that survived the galaxy-shattering cataclysm at the end of the Y3K plot arc.

The online version of the game has recently started up again for a ninth season. This time, the game also has its own Wikia, which is becoming quite impressive. Three previous seasons of stories are available online for free here: Season 4.2, Season 4.3,Season 8, and Prayer for the Technocrats. Two books by co-creator Marcus Johnston have been published set in this universe, one a novelization of Season 4.2, and the other a prequel novella set immediately before Season Nine, both are available on Amazon. At least two or three more novels are planned. The current Ninth-season story so far can be found Here. A website depicting the ships of the Earth Fleet is available Here, and a very cool chart illustrating the sizes and silhouettes of starships from Tech Infantry compared to those from some more popular sci-fi series is available HERE.

Tropes used in Tech Infantry include:
Retrieved from "https://allthetropes.org/w/index.php?title=Tech_Infantry&oldid=1651344"
Categories: