Everything About Fiction You Never Wanted to Know.
< Cartoon Network
Jump to navigation Jump to search
/wiki/Cartoon Networkcreator 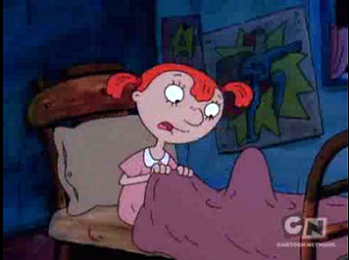 Gwen: Find something to touch!
Kevin: Huh? (confusedly reaches hand toward Gwen before realizing what she actually means) Oh.

Kevin: What am I supposed to do with the extra arms?
Ben: You never used to have problems using your arms. That's what the girls say!
Kevin: Which girls?

Humongosaur: Um, one of my balls fell off.

Raj: Who would have thought that my buns would cause this much excitement?
Lazlo: You have very nice buns, Raj.

Milt: Edward, there's a party in my pants, and you're invited!

Nurse Gazelle: "That's not the only thing ASS-tronomical."
Pixiefrog: (With a close up of his giant butt, which squeezes into the iris out) "YOU'VE MADE YOUR POINT!"

Margery: "Well, I'm just not sure if I approve, I don't know if those two (Mike and Og) are old enough to go out on a boat alone."

Mike: "Sister Mary Francis, where are you now?" (faints)

Mike: Is this what I think it means?