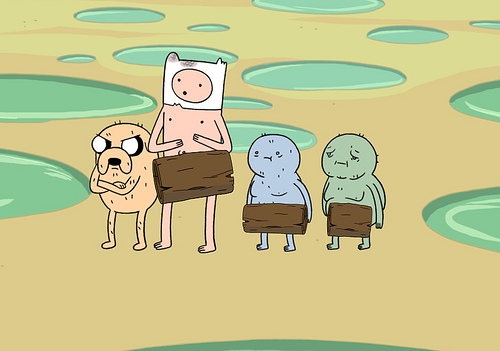 Those logs were originally supposed to be beavers. (The logs are wood.)

What time is it? Uh...well...not radar time, apparently.

Adventure Time is rated TV-PG, but it is still considered a kid's show... apparently. While it is cleaner than other radar-dodging shows, that doesn't mean that it will not use its rating to its advantage.

"What Have You Done?"

"It Came from the Nightosphere"

"Loyalty to the King"

"Blood Under the Skin"

"The Chamber of Frozen Blades"

"Belly of the Beast"

"Memory of a Memory"

"From Bad to Worse"

"No One Can Hear You"

"Hot to the Touch"

"Return to the Nightosphere"