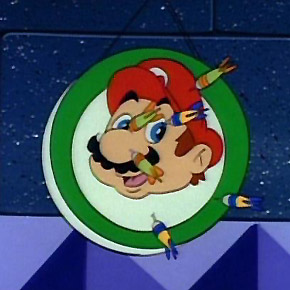 Bob is really mad at Alice so he does the most cathartic thing he can: He puts a picture of her face over a dartboard and throws darts at her (or rather, the picture of her).

Sometimes happens right before Bob is going to unleash his real torments against Alice. Other times, Bob simply hates Alice, and one of his pastimes is casually throwing darts at her picture.

Characters in this situation usually have good dart-throwing skills and almost always hit their target. In comedies, expect a dart to be thrown at the board just as Alice opens the door next to it.

Occasionally a punching bag may be used for the same purpose, particularly if the angry person is athletically-inclined.

See Decision Darts for another trope that involves dart throwing and Percussive Therapy for a more general example of taking out frustrations on inanimate objects.

Examples of Dartboard of Hate include:

Retrieved from "https://allthetropes.org/w/index.php?title=Dartboard_of_Hate&oldid=1860517"
Categories:
Cookies help us deliver our services. By using our services, you agree to our use of cookies.