Everything About Fiction You Never Wanted to Know.
< Disney Animated Canon
Jump to navigation Jump to search 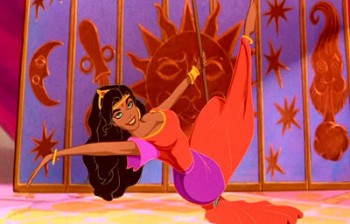 She's dancing around the spear as if it were a pole...subtle, Disney.

See also Getting Crap Past the Radar/Film for live-action movies.

He then proceeds to laugh maniacally while Jasmine looks horrified and Aladdin pulls her close while glaring at Mozenrath.