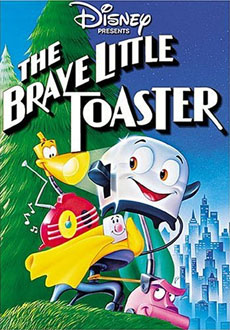 The film is not quite as cheery as this picture. [1]

The Brave Little Toaster is a 1987 animated film produced by Hyperion Pictures, distributed by Disney, and based on a children's novel by Thomas M. Disch.

The film centers on five appliances—the eponymous Toaster, Lampy (a lamp), Kirby (a vacuum), Radio (guess), and Blanky (an electric blanket) -- who live in a old cabin out in the woods. The appliances have been left behind by their Master, a young boy, and have been waiting for him to return for years. When the cabin is put up for sale, the appliances determine to go find the Master (who, unknown to them, is now a young man getting ready for college) by making a journey to the city.

Though it didn't get much of a theatrical release, it's still fondly remembered and has become somewhat of a cult classic by its own right amongst many kids of the late Eighties and Nineties thanks to its airings on the Disney Channel and its home video release. It's proved to be a popular enough film to grant two direct-to-video sequels, and neither of them really sucked. As a side note, some of the people behind this film (such as John Lasseter and Joe Ranft) went on to go work for another company specializing in heartwarming animated features...

The Brave Little Toaster, despite its title (and its cover), has also become notorious as one of the most scary movies Disney ever produced, with gems like the song "Worthless", as you'll see here.

WARNING: If you plan on seeing this film, please make sure you're not going to be replacing or throwing out any old appliances in the near future. You will regret it.

Tropes used in The Brave Little Toaster include:

Lampy: Hey, come over here. I'm gonna...
Radio: Why, do you dare to cross foils with the greatest Saxon swordsman in the land? Haven't you the slightest idea who you're dealing with?
Lampy: Precisely - a total idiot!
Radio: If your sabre wags as loosely as your Norman tongue, you'll be run through in an instant. Defend yourself, Sir Lampy of Locksley!
[Radio continually whacks Lampy with his antenna, Blanky falls on them]
Radio: A blow for Richard! A blow for Marion! A blow for Mario, the garbage man! And for Carl and all the boys at the delicatessen! And here's one for the guys on 5th street!

Personified hearse: I took a man to a grave yard. I beg your pardon, but it's quite hard enough just living with the stuff I have learned.

Radio: Shut up! Shut up!
Toaster, Kirby, and Blanky: SHUT UP!

Lampy: I think he was laughing at us.
AC: You know something, you're a real bright little lamp.
Lampy: Oh thanks! (Beat) "Heeeeeyy...."

Radio: We're trapped here like rats! Small, little rats with no hair and one leg.

Blanky: Poor Air Conditioner...
Toaster: I didn't think he'd take it so hard.
Kirby: Eh, he was a jerk anyways.

Balloon: Howdy y'all! Where ya headed?
Toaster: Mars!
Balloon: (Laughing) You're pulling my string!
Blanky: No we're not, we're way over here, and you're way over there.

Kirby: "Oh, this is great fun! Let's make these outings a regular thing!"

Toaster: Well, I'm going, with or without you.